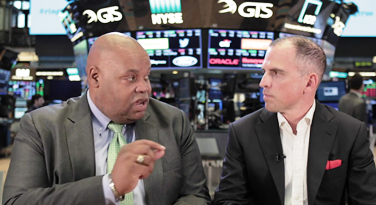 Breaking News: GTS Securities, the NYSE’s biggest specialist firm aka Designated Market Maker (“DMM”) and one of the electronic market-making world’s biggest players in the FX and rates markets is now aiming to become the ETF industry’s biggest market-maker the old-fashioned way, by buying into the space. After several months of speculation and rumors of a pending deal, GTS formally announced today they have acquired the entire team of ETF brokers and traders from Cantor Fitzgerald. According to the press release issued by GTS, the deal to acquire Cantor’s ETF team of approximately 35 ETF sales traders led by ETF industry veteran Reginald Browne is expected to close in February 2019. Terms of the transaction were not disclosed.

GTS was established by former NY Merc floor traders Ari Rubenstein and David Lieberman, who looked to Amit Livnat, a top-of-class graduate from the world famous Israel Institute of Technology to serve as the firm’s resident tech wonk. Of the three, Rubenstein is the camera-facing thought-leader, who first cut his teeth in the trading business as a runner on the floor of the New York Mercantile Exchange and later became a floor trader on the New York Cotton Exchange. Aligning with fellow floor trader David Lieberman and Livnat, GTS was first positioned as a quantitative prop trading firm that leveraged in-house trading technology and home-grown algorithms to peel incremental profits by executing tens of thousands of transactions per day across US equities, rates and FX markets. GTS levered its high-frequency trading domain expertise and morphed into its current role as a global trading powerhouse once the firm took control of the NYSE’s biggest specialist firm operated by a unit of Barclays Bank.

“For the first time on a scale never seen before, the most sophisticated Wall Street technology is being deployed for mainstream investors, be they institutional or retail,” said Ari Rubenstein, CEO and co-founder of GTS. “Investors around the world can now leverage the very best in machine learning, artificial intelligence and execution technology to help them save money whenever they trade and invest. This is an unprecedented opportunity for investors that unites unrivaled innovation with pioneering client service – while enhancing the capital raising opportunities for listed companies.”Stacey Cunningham, president of the New York Stock Exchange said, “The NYSE and our partners embody the synthesis of technology and human judgment, leading to the best possible outcome for investors and issuers.”

END_OF_DOCUMENT_TOKEN_TO_BE_REPLACED

Nasdaq OMX Group said Wednesday that it will be able to launch its planned program for paying market makers to trade in particular exchange-traded funds.

The Market Quality Program will launch by the end of June, Nasdaq OMX said Wednesday. The Securities and Exchange Commission in March approved the plan on a pilot basis.

Under the program, sponsors of exchange-traded funds will be able to contribute funds to Nasdaq, which in turn can be used to pay market makers to incent them to handle particular funds.

The sponsor will pay Nasdaq OMX an annual fee of $50,000 to $100,000 per ETF, in addition to standard listing fees. The market quality program fee can get rebated, under certain circumstances. Rebates will be made quarterly.

Payments, according to a note to traders, will be made if a market marker:

An ETF is no longer in the program when trading achieves average volume of 1 million shares a day for three months in a now. END_OF_DOCUMENT_TOKEN_TO_BE_REPLACED

Knight Capital (NYSE: KCG), the biggest ETF market maker in the U.S., is seeking financing after saying that a trading glitch involving its systems on Wednesday that affected 148 stocks will result in a $440 million pre-tax loss. The company’s stock was down 45 percent in early morning trade.

“The company is actively pursuing its strategic and financing alternatives to strengthen its capital base,” Knight said on Thursday in a press release, stressing that it will be business as usual for the company in the wake of the wayward trading episode.

The swiftly moving story is one of the more astonishing developments in the world of electronic securities trading, where Knight plays a dominant role. Industry sources say that whatever reputational challenges Knight faces at this very moment pale in comparison to the attractiveness of its business, or at least particular pieces of it.

The Jersey City, N.J.-based firm, the biggest ETF U.S. market maker, said in the press release that while the whole episode “severely impacted” its capital base, its broker-dealer units remain in compliance with net capital requirements.

*Editor insert: MarketsMuse spoke with one industry expert, who requests no mention of his name, but framed the Knight story as follows: “This is exactly the type of episode that should cause institutional fund managers to re-think how/where their orders are executed. Relying on a single market-making firm–which by definition, is counter-intuitive to the notion of best execution–is a recipe for disaster. The right approach is to use a qualified, agency-only liquidity aggregators– firms that focus on capturing best prices by canvassing a broad list of market-makers. The latter approach addresses the PM’s fiduciary obligation, and significantly mitigates dependence on one market-maker, particularly one that may have been perceived for being “too big to fail.”

The Accident That Happened

On Wednesday, Knight saw its stock drop by a third due to the wayward program trading involving its system. The episode was reportedly triggered by a human error that caused hundreds of trades to be executed in minutes instead of over a longer period.

“An initial review by Knight indicates that a technology issue occurred in the company’s market-making unit related to the routing of shares of approximately 150 stocks to the NYSE,” the company said in a prepared statement on Wednesday.

Following a similar proposal by Nasdaq OMX, NYSE Euronext has unveiled a plan to allow market makers to get paid for providing liquidity for exchange-traded funds. If approved, the plan could reduce the number of funds listed without lead market makers.

On April 27, NYSE formally asked the Securities and Exchange Commission to authorize a pilot program that would add incentives for firms that become LMMs. Under the proposal, issuers would be allowed to pay an additional $10,000 to $40,000 per year to attract market makers.

Bryan Johanson, managing director for global index and exchange-traded products at NYSE Euronext, said firms have been increasingly reluctant about becoming LMMs, and the exchange wanted to offer an additional incentive to attract market makers to that role.

Under the NYSE plan, issuers could pay an optional quarterly incentive fee to the exchange, which would then use that money to distribute credits to LMMs that meet minimum performance standards.Johanson said the exchange discussed the matter with market makers and found that around $10,000 to $40,000 was the level at which they started to consider taking on new exchange-traded products.

“We didn’t want this to be overly burdensome for the issuers,” Johanson said. “We tried to balance their interests with the market makers so we could come up with a figure that was appropriate and fair.”