MarketsMuse.com Tech Talk update profiles the latest news flash for FinTech wonks: Whilst the securities industry landscape continues to debate the “dark pool vs. lit market” topic, the London Stock Exchange (LSE) is taking a chapter from the behometh brokerdealer universe with their own scheme to introduce a dark pool, but the regulated LSE proposes to make their platform a ‘non-profit utility”. Below is courtesy of extract from Bloomberg LP reporting. MarketsMuse Editor’s note: Our MM title editor apologizes to those who might be confused by the reference to the once notorious Manhattan NY gathering place for those seeking to keep their wild side ‘dark’..but we thought it was a fun title nonetheless.. 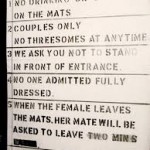 (Bloomberg) — London Stock Exchange Group Plc has entered the competition to build a not-for-profit European dark pool backed by a consortium of banks and asset managers.

LSE’s Turquoise division now appears on Plato Partnership Ltd.’s website of the firms vying to supply the dark pool’s technology. It will compete against companies including Bats Global Markets Inc., Aquis Exchange Ltd. and Nasdaq OMX Group Inc. Although seven companies appear on the list, one of them — Cinnober Financial Technology AB — has already been rejected, according to people familiar with the matter, who asked not to be named because the selection process is private.

Market professionals are watching the selection process because it will provide clues as to Plato’s plans, much of which remain unknown. Its choice of a traditional exchange or a venue whose stakeholders are major banks could have implications for the not-for-profit venture’s stated ideals, which include a commitment to a balanced partnership between investors and banks.

“As much as the process can be as transparent as possible or as clear as possible to the underlying individuals, that will generate more trust in the system,” said Rebecca Healey, market structure analyst at Tabb Group LLC in London. “We have to recreate a level of trust in capital markets. That has to start from the market participants themselves.”

The chief executive officer of LSE, Xavier Rolet, personally attended a meeting to pitch Plato on the merits of selecting Turquoise, according to people familiar with the discussions who asked not to be identified because the discussions were private. Representatives for LSE and Plato declined to comment. Veronica Augustsson, the CEO of Stockholm- based Cinnober, which doesn’t run its own market, also declined to comment.

Banks including Goldman Sachs Group Inc. and Deutsche Bank AG have stakes in Turquoise and are also backing Plato. The not- for-profit dark pool plans to use the money it makes to fund academic research into markets. The venue will help investors trade large blocks of stocks — something that Turquoise has also focused on.