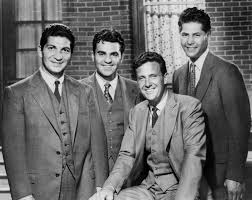 Investment research and expert ideas, whether within the context of equities analysis or global macro perspective, has long been the domain of sell-side investment banks, whose research insight is typically bundled as a ‘free product’ within the range of fee-based services provided, including trade execution. Those old enough to remember the ‘dot-com bubble’ days will recall that much of Wall Street’s so-called research was (and arguably still is) notorious for being heavily tilted towards “buy recommendations” in favor of the investment bank’s corporate issuer clients.

This clearly conflicted practice was perfected in the late ‘90s by the likes of poster-boy analyst Henry Blodget (since banned from the securities industry, and ironically, now Editor and CEO of financial media company Business Insider) and was lambasted by securities industry regulators when the “Internet bubble” burst. Those chasing-the-horse-after-the-barn-door-closed efforts since led to a regime of regulation and firewalls intended to distance in-house research analysts from their investment banker brethren so as to mitigate biased recommendations and conflicts of interest. Compliance officers across the industry found themselves facing a host of new rules, and that ‘compliance contagion’ served as the catalyst for a spurt in “independent research boutiques” offering “unbundled” and un-conflicted research sold as a stand-alone product with no ties to execution or trading commissions.

However compelling the notion, and despite the regulatory impetus to foster the growth of independent research boutiques, the business model for these firms has proven challenging during the past 10-15 years. Many boutique research firms floundered or failed for several crucial reasons, including but not limited to (i) the burdensome costs and means associated with creating a stand-alone brand, (ii) the challenge of delivering consistent and compelling content to institutional investment managers and sophisticated investors at a price point that could prove profitable and (iii) the non-trivial logistics required to deliver content in a compliant manner. In the interim, regulators stood by and observed, and digital delivery mechanisms for independent researchers only slowly evolved. Investment banks, never shy when it comes to creative workarounds, bolstered their research ranks and produced more content, even if mostly undifferentiated, but still promoted by the strength of the investment bank’s brand.

All of this is about to change again, causing some to conclude that regulatory market moves in cycles every decade or so, much like the stock market moves in cycles. The current bull market case for unbundled independent research is not a result of efforts by get-tough-on-Wall Street types such as New York Attorney General Eric Schneiderman or Massachusetts’ kindred spirits Elizabeth Warren and William Galvin, and the bull case is certainly not because of any efforts made by the SEC. To a certain extent, the positive outlook for those in the unbundling space is based on Moore’s Law and the advancement of Fintech-friendly applications, but it is more directly attributed to a new European Union law inspired by MiFID II, that if passed as expected, will require investment managers to pay specifically for any analyst research or related services they receive. With that new rule (which includes more than a few line items), many large money managers are starting to follow the proposed rules globally; investment banks in the U.S. (and obviously those in Europe) are devising new business models for one of their oldest and highest-profile functions: offering ideas to customers that banks can monetize through commission-based services. 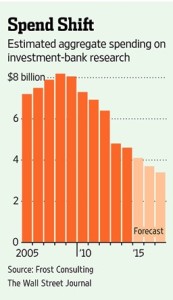 More than some across the major continents believe that however much top investment bank brands are a decidedly powerful selling tool for research product, the power of the internet has enabled the distribution of independent research and enables a Chinese menu of pricing schemes via a continuously-growing universe of independent portals that invite content publishers to sell their products using an assortment of social media-powered distribution channels and revenue-sharing schemes.

While bolstering objective research content is a natural business extension for those having captive brokerage clients and for terminal-farm behemoths, perhaps even more interesting is that start-ups in the unbundling space are starting to percolate.

On the European side of the pond, UK-based SubstantiveResearch, created earlier this year by former EuroMoney Magazine publisher Mike Carrodus, is positioned to be an institutional research thought- leader that curates and filters both independent and sell side global macro research, with a sleeve that hosts regulatory events for investment manager content consumers and sell-side content providers.  Start-ups in the US include among others, Airex Inc. , which dubs itself “the Amazon.com for financial digital content” and recently secured funding from fintech-focused merchant bank SenaHill Partners. TalkMarkets.com is another notable entrant to the space, and was created in late 2014 by Boaz Berkowitz, a former “Bloombergite” who was also the original brain behind Seeking Alpha. From the traditional financial media publishing world, industry stalwart Futures Magazine, recently re-branded as “Modern Trader” and the parent to hedge fund news outlet FinAlternatives is also embracing the research content unbundling movement as a means towards capturing more Alpha and better monetizing relationships with content providers. Each have their own business models, including the use of cloud-based technology and coupled with the muscle of creative online marketing, social media tactics and search-engine ranking techniques.

While the start-up space is often littered with short shelf-life stories, these new unbundled research distribution vehicles are being enabled by the fintech revolution and embraced by distributors of content, high-profile independent research providers, as well as by at least one major bank seeking to hedge its internal bets; earlier this year, Deutsche Bank inked a deal with upstart Airex, such that DB’s proprietary equity research is available on a delayed basis and can be purchased by any AIREX Market shopper. In the case of now 6-month old TalkMarkets, they are embracing an advertising-based business model, which is predicated on building an outsized audience of sophisticated retail investors for prospective advertisers. To date, they have enlisted more than 350 content providers and 10,000+ registered users. While there is no cost to access the platform, content providers are able to upsell subscription-based services and at the same time, earn ‘points’ that can be converted into the private company’s equity shares.

According to former sell-side global macro strategist Neil Azous, the Founder/Managing Member of think tank Rareview Macro LLC, and the publisher of subscription-based “Sight Beyond Sight” which is now being distributed across several channels apart from the firm’s website (including via Interactive Brokers), “Truly superior, high-quality content, including actionable ideas remains relatively scarce, but the fact remains, content has become commoditized. The good news is that banks are not the sole source of carefully-conceived research and the better news is that conflict-free content publishers can now more easily distribute via a broad universe of narrow-casting, web-based channels.”

Added Azous, “For independent research providers and trade idea generators, it’s arguably a watershed moment. As new rules take shape, content publishers, including those who previously worked under investment bank banners, can now reach an exponentially larger universe of content buyers through these new distribution channels. It’s a numbers game; instead of working inside an investment bank and trying to ‘sell’ a traditionally high-priced product to a relatively narrow list of captive clients, the more progressive idea generators can re-tool their pricing and make their product available to exponentially more buyers, and in a way that conforms to and stays within goal posts of compliance-sensitive folks.”

However much it makes sense to foster the easy distribution of independent and un-conflicted research, Wall Street et. al. is not going to easily abrogate their role for providing ideas or forgo the trade execution commissions derived from those proprietary ideas. Banks are reported to be devising new pricing models for investment research in view of EU proposals that could prevent research from being paid for using dealing commissions. In an unbundled world, where payments are separated, competition for equity and credit research may increase as asset managers look beyond traditional sources, which may trigger fragmentation. They may also move research in-house. The U.K.’s FCA, which is driving the debate, has endorsed the EU proposals.

As noted within the most recent edition of Pensions & Investments Magazine, Barclays PLC, Citigroup Inc., Credit Suisse Group AG and Deutsche Bank AG are working with clients to come up with pricing for the analyst research customers receive, according to bank executives. Prices are expected to range from roughly $50,000 a year to receive standard research notes, up to millions of dollars for bespoke research and open-door access to analysts.

“We are working to change the mind-set so that fund managers understand that research should be treated as a scarce resource. There is a great opportunity to tap into experts in their fields at brokers, but we need to really think about the value of research and determine the right amount to pay for it,” said Nick Anderson, head of equities research at Henderson Global Investors.

The following [excerpted] analysis is by Bloomberg Intelligence analysts Sarah Jane Mahmud and Alison Williams and helps summarize the current outlook. It originally appeared on the Bloomberg Professional service.
END_OF_DOCUMENT_TOKEN_TO_BE_REPLACED