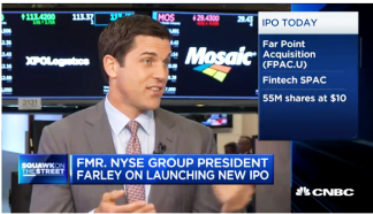 Tom Farley, the former top gun at the NYSE, has long advocated the benefits of raising capital via the construct of Special Purpose Acquisition Company aka “SPAC”, aka “Blank Check company.” Now he’s become the CEO poster boy for SPACs with the formal IPO and NYSE listing of Fintech SPAC Far Point Acquisition Corp., a financial technology-themed acquisition company, which is backed by activist investor and fintech aficiondo Dan Loeb.

42-yearold Farley, a Georgetown University alum and former ICE senior executive and the second youngest person to serve as NYSE President when taking on that role in 2012, will serve as CEO of the ‘fintech buyout’ company. Farley is arguably one of the industry’s most fintech-fluent folks, given his role in helping to transform NYSE into a financial industry trading technology centerpiece.

Farley’s long-held view towards the future is evidenced by the fact  NYSE’s two most dominant designated market-makers aka “DMM” firms, GTS Securities and Virtu Financial are companies that are synonymous with the phrase fintech. Both firms started their journeys as prop trading firms specializing in ‘high-frequency-trading’ and their more recently attained NYSE ‘specialist’ roles are powered by next generation in-house algorithmic trading and artificial intelligence tool kits. GTS Founder Ari Rubenstein, whose NYSE DMM is responsible for maintaining fair and orderly markets in 1200+ companies and who also oversees one of the industry’s most robust, multi-asset liquidity-providing prop trading platforms, is also a founding member of industry trade group Modern Markets Initiative (MMI)

Back to SPACs- For those who may have missed the multiple memos coming out of the biggest investment banks, the blank check company construct provides a means to create a publicly-traded ‘shell company’, whose use of proceeds is intended to acquire a private company (or companies) and seamlessly “jump the shark” by rolling the private company into the publicly-listed company without bearing the burden of the time and cost that is synonymous with taking a company public via the traditional IPO process.

First introduced in the early 1970’s, blank check companies were soon derided by securities regulators after a string of capital raises by companies that had notoriously little corporate governance, enabled unsupervised CEOs to empty corporate coffers for personal gain, leaving investors with nothing. In the early 1990’s, the construct was re-invented by small-cap investment bank GKN Securities’ founders David Nussbaum, Roger Gladstone and Robert Gladstone, who have been credited with introducing the SPAC construct (along with securing a trademark for SPAC), which is chock full of checks and balances. The GKN leadership team’s early success in floating ‘blank check’ companies led to their creating a new firm, EarlyBirdCapital which has become the thought-leader in SPAC offerings, as the SPAC template has since been emulated by the financial industry’s leading investment banks and endorsed by major exchanges across the globe.

In the past 10 years alone, tens of dozens of capital raises via the SPAC construct have delivered billions of dollars of dry powder for designated acquisition companies that have since effected tens of billions of dollars worth of ‘quick IPOs’ for companies in nearly every industry sector, including the cannabis industry,

One fintech industry veteran and startup industry consultant who coincidentally helped GKN introduce their first SPACs to institutional investors back in 1993, and now serves on the advisory board of fintech merchant bank SenaHill Partners said, “Far Point Acquisition may not be the first Fintech SPAC, but its launch clearly reinforces a compelling approach to raising capital for the purpose of bringing established private companies into the publicly-traded ecosystem.”

Via video clip below, former NYSE top gun Tom Farley expresses his views on the SPAC construct and the fintech sector, and provides a glimpse at the prospective target acquisitions that Farley will be aiming for.