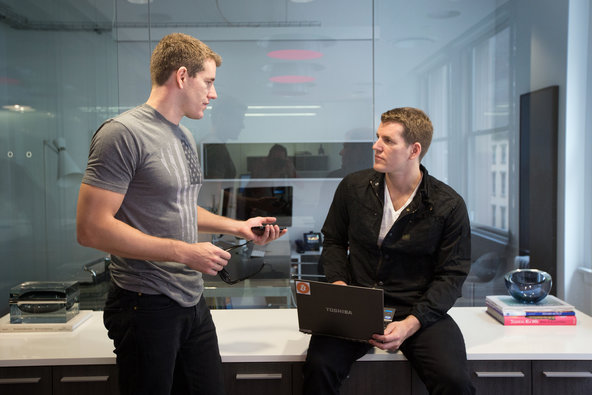 The Winklevoss twins, Cameron and Tyler, famed for suing Mark Zuckerburg, claiming he stole Facebook from their own social networking site ConncetU, have started another new venture.  In April 2013, they claimed that they owned of 1% of all Bitcoins in existence. The Winklevoss twins now prepare to sell their Bitcoin shares on the Nasdaq.

Slowly but surely, Cameron and Tyler Winklevoss’ Bitcoin Trust is putting the final touches on its proposed cryptocurrency-backed exchange traded fund, filing for shares on the Nasdaq.

On Wednesday, the Bitcoin Trust filed with the Securities and Exchange Commission to sell 20.1 million shares on the Nasdaq exchange, reports Ciara Linnane for MarketWatch. The filing did not include a launch date or expense ratio, indicating the Bitcoin Trust is not close to coming to market.

In May, a regulatory filing revealed the Winkelvoss Bitcoin Trust will trade on the Nasdaq. In July, a Form S-1 filing with the Securities and Exchange Commission reveled the ETF, assuming it comes to life, would trade under the ticker “COIN.”

“The investment objective of the Trust is for the Shares to reflect the performance of the price of Bitcoins, as measured by Winkdex, less the expenses of the Trust’s operations,” according to the SEC filing.

The brothers have also introduced the bitcoin index, or so-called Winkdex, which will also be used to price the value of assets held by the Winklevoss Bitcoin Trust.

The trust’s sponsor is Math-Based Asset Services LLC, which was formed in mid-2013. The company will run the new benchmark, tracking bitcoin prices based on “qualified bitcoin exchange transaction data… over a trailing two-hour period,” according to the SEC filing.

Bitcoin is one of the more popular digital currencies available. The cryptocurrency can be stored and traded electronically. The currency is stored in a digital wallet and is traded through a downloadable software or through a third party provider. The main thing traders should understand is that the Bitcoin is itself is considered a form of currency and not just an online service to transfer U.S. dollars.

Many users utilize the currency because the bitcoin is decentralized – there is no central bank issuing or monitoring the currency. Every transaction is validated by a Bitcoin miner – miners are entities within the Bitcoin network that validate the transaction by solving a mathematical proof. This system prevents double counting of Bitcoins and keeps a record of all transactions.

Bitcoin prices have gained widespread attention when the value of the currency skyrocketed above $1,000. However, the cryptocurrency has stumbled in 2014, declining 58.7% year-to-date to about $315.