(WSJ) –BlackRock Inc. said it suspended the issuance of new shares in IAU, its roughly $7.7 billion gold exchange-traded product due to an administrative oversight, in the latest bruise for the exchange-traded-fund industry and its largest provider.

Analysts said the move on Friday threatens to drive business to competitors and intensify scrutiny of the $2 trillion ETF business in the U.S. It also underscores concerns that these products—baskets of assets that trade intraday like stocks—are vulnerable to breakdowns.

Friday’s suspension came after a 20% run-up this year in the price of gold. The rally had spurred increased demand for the iShares Gold Trust, which is traded on the New York Stock Exchange under ticker symbol IAU. Some analysts said the surge in gold-futures prices likely drove up demand for the product for use both in bets that gold would rise and bets that it would fall. Those wagers came amid uncertainty over the health of the global economy and concerns about resilience of the financial system in the face of negative interest rates in Europe and Japan.

BlackRock wasn’t able to issue new shares to meet the demand because it failed to file the appropriate Securities and Exchange Commission paperwork, the firm said.

The breakdown could prevent the fund from accurately reflecting the value of gold, interrupting a key process that lets investors arbitrage any difference between the quoted price of the ETF and the value of the underlying assets.

The suspension could mean the price of the fund would rise faster than the price of gold until share creation resumes. Investors are “going to be paying more of a markup,” said Mohit Bajaj, director of ETF trading at WallachBeth Capital LLC, which trades iShares Gold Trust. “I think people are going to be trading GLD instead of IAU now,” he said, referring to the ticker symbol for SPDR Gold Trust, which is run by a unit of the World Gold Council and marketed by State Street Corp.

In the week ended Thursday, investors put more than $1.1 billion into the iShares product’s key rival, the about $32 billion SPDR Gold Trust, more than any other exchange-traded product, according to FactSet data.

While the market seemed generally unimpressed by the Federal Reserve’s pledge to hold interest rates down until the U.S. unemployment rate drops below 6.5 percent, the usual suspects among ETFs performed as expected Wednesday.

There is another near-term option for traders looking to take advantage of monetary easing and it arguably has nothing to do with the Fed. Emphasis on “near-term,” but it is worth noting the ProShares UltraShort Yen (NYSE: YCS ) surged 1.5 percent on volume that was better than triple the daily average on Wednesday.

In the process, the ProShares UltraShort Yen broke through resistance in the $46 area to close at $46.72. That is the highest closing print for YCS since April.

The utility of YCS, which in the words of its issuer “seeks daily investment results, before fees and expenses, that correspond to two times the inverse (-2x) of the daily performance of the U.S. Dollar price of the yen,” is clear.

Japan, the world’s third-largest economy, is scheduled to hold elections on Sunday December

16. Given recent price action in YCS, it would appear forex traders are pricing in victory for Shinzo Abe in his quest to become prime minister again and for Abe’s Liberal Democratic Party.

Should Abe emerge victorious, the yen will likely plummet because Abe has been vocal in his desire to weaken his country’s currency. In fact, Abe is a dream come true for quantitative easing addicts because he has called on the Bank of Japan to engage in unlimited easing .

Recent polls suggest Abe will win and that Japan’s ruling Democratic party will suffer significant losses. That is good news for YCS.

3X Bear Shares (NYSE: FAZ ) or the ProShares UltraShort S&P500 (NYSE: SDS ). That means YCS is best used as a short-term instrument not a long-term investment

Second, the yen has a penchant for short-term declines when the Bank of Japan intervenes in the currency market or when rhetoric, such as Abe’s, is favorable. However, the Japanese currency has been strong in recent years. YCS has a plain vanilla counterpart, the CurrencyShares Japanese Yen Trust (NYSE: FXY ). FXY’s daily chart is a train wreck, but over the life of that ETF, it has surged 40.5 percent.

Exchange traded funds are among the more popular ways to trade. Called ETFs on the Street they allow investors to diversify risk through a basket of stocks.

A pro like trader Steve Grasso of Stuart Frankel who works on the floor of the NYSE, can barely move a foot or two without hearing “Buy the XLF or get me out of the GLD, now!’

But these and other popular ETFs may not always be your best bet.

According to Matt Hougan, IndexUniverse president of ETF analytics, there are alternative ETFs that aren’t as widely known, but may actually better serve your needs. He profiled five of them on CNBC’s Fast Money. They follow:

Looking at the GLD, Hougan says the IAU  holds exactly the same thing. “It’s plenty liquid and owning it is about half the cost of the GLD.”

Hougan says this is something of a popularity content. “People know the XLF .” However, the XLF only tracks large caps. (Click here to see top holdings on Yahoo! Finance.) If you want exposure to the entire banking sector Hougan recommends the IYF  for “the full spectrum.” END_OF_DOCUMENT_TOKEN_TO_BE_REPLACED 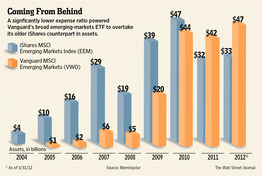 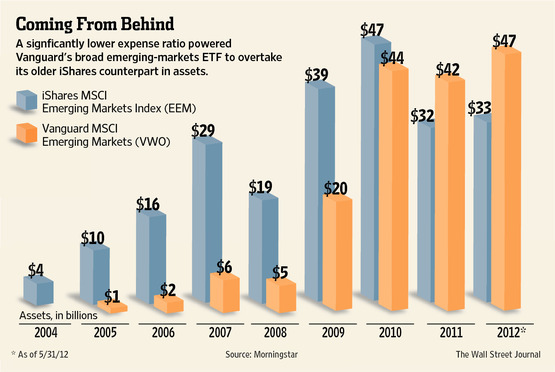 END_OF_DOCUMENT_TOKEN_TO_BE_REPLACED

Here’s the verbatim extract courtesy of Benzinga On Line:

Consumer Staples Select Sector SPDR (NYSE: XLP [FREE Stock Trend Analysis]) The Consumer Staples Select Sector SPDR is of course low-beta and almost downright boring in the world of sector ETFs, but just because one has $360 million to play with doesn’t mean that they should be taking on excessive risk. At least one of your new ETF positions should be something for the long-term and something that won’t cause lost sleep at night.

A stake in XLP would make your grandad and Warren Buffett proud. Rounding up a bit, 1 million shares of XLP would run about $34 million, leaving the Mega Millions winner with $325 million, some of which can be devoted to the…

WisdomTree Emerging Markets Equity Income Fund (NYSE: DEM) Of course some of the winnings should go to an emerging markets fund, but we can do better than standard fare such s the Vanguard MSCI Emerging Markets ETF (NYSE: VWO). There’s a lot to like with DEM, including a yield approaching 4% and that the fund is up 12% year-to-date, just be advised Brazil and Taiwan account for over 43% of the fund’s country allocation.