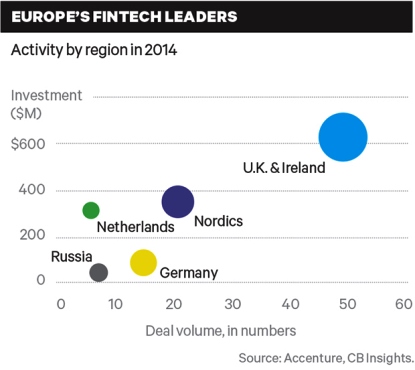 The FinTech aka financial technology revolution continues to advance across the financial industry landscape, as dozens of startups from block chain to bond trading initiatives work towards securing a presence within the institutional financial services ecosystem. And, as profiled in a brilliant column this week from Institutional Investor spotlighted by MarketsMuse tech talk curators, the City of London is quickly carving out a leading role for being Europe’s epicenter for incubating the next greatest applications. The question now is, “How soon will London’s Silicon Roundabout squeeze out Silicon Alley and Silicon Valley?”

The excerpt from II’s Charles Wallace latest report, “FinTech Startups Flock to London’s Silicon Roundabout” is below. A link to the entire article follows accordingly.

Raja Palaniappan worked at Credit Suisse in London as a bond trader for a number of years before deciding to go out on his own and launch an online marketplace called Origin Markets, which seeks to revolutionize private placement bond issuance by eliminating intermediaries like Goldman Sachs Group. Although American by nationality, Palaniappan decided to open his platform in London because he felt the city offered greater opportunity than New York or Silicon Valley for a new financial technology, or fintech, company (see “ Former Trader Raja Palaniappan Sees Fintech Opportunity in Bonds”).

“London does have a competitive advantage in fintech because you’ve got technology in Old Street and finance on Liverpool Street and they’re about three quarters of a mile apart,” Palaniappan says, referring to two areas of the City of London financial district. “In the U.S. technology lives on the Left Coast and finance on the Right Coast, and there’s little consolidation between the two.”

According to consulting firm Accenture, Europe is the world’s fastest-growing area for fintech funding, with spending rising 215 percent last year, to $1.48 billion. London had the largest share of that investment, some £342 million ($530 million), according to London & Partners, a government-funded agency supporting the London economy. Although the U.S. continues to lead overall fintech funding, with $2 billion in 2014, much of that was Silicon Valley–based investment in business-­to-consumer start-ups like Lending­Tree, an online exchange that connects consumers with lenders; in London much of the activity is targeted at institutional financial services such as banking, insurance, trading and asset management.

“Since the Industrial Revolution, London has been the center for international commerce, and the melting pot that you have in terms of people and talent is pretty unique in the world,” says Sean Park, a Canadian who runs Anthemis Group, a firm that advises and invests in fintech start-ups from offices near Oxford Circus in Soho.

London’s growth as a fintech hub is not exactly surprising. The city is the world’s leading center for international wholesale financial services. It boasts more banks than Hong Kong or New York, leads the world in foreign exchange trading, has vibrant asset management and insurance sectors, and is home to the Eurobond market. In addition, fintech enjoys strong support from the British government, which sees the financial services sector as essential to the health of U.K. Plc and technology as critical to maintaining London’s competitive edge. Financial services employ some 2 million people, or about 7 percent of the country’s workforce, and generate 10 percent of the U.K.’s gross domestic product.

The government funds a variety of organizations that support what is known locally as Silicon Roundabout, offers tax incentives to investors and has streamlined regulations for start-ups — a crucial advantage in heavily regulated financial services. Officials have even promised to fast-track visas for companies seeking to import talent, though some start-ups complain about difficulties in getting software engineers into the country from Eastern Europe. In a telling indication of this political support, when a group of fintech companies recently traveled to Singapore to demonstrate their wares, the delegation was led by London’s popular mayor, Boris Johnson.

The London fintech ecosystem currently has 70 shared office spaces with names like Huckletree, WeWork and TechHub, which rent desks and provide such amenities as gourmet coffee, video game rooms and showers to itinerant entrepreneurs. The city also boasts 36 business accelerators, which provide mentoring as well as office space. The accelerators are sponsored by companies ranging from Techstars, a Boulder, Colorado–­based outfit, to Barclays Bank. Virtually every night there is a conference or gathering devoted to fintech development, attracting visitors from Silicon Valley, New York and continental Europe.

London’s greatest advantage may be its people. According to London & Partners, fintech already has 44,000 workers in the capital, more than in New York or Silicon Valley. And unlike in the U.S., where many tech start-ups are founded by 20-somethings hoping to overthrow an entire industry, in London a considerable number of fintech companies are being founded by midcareer financial professionals with a working knowledge of financial services firms and markets. They are often seeking to create technology solutions that can be used by big institutions, not compete with them.

“The entrepreneurs here are a little more experienced, and a lot of people have left established organizations,” says Eric Van der Kleij, CEO of Level39, a fintech accelerator financed by Canary Wharf Group, the property company that operates the financial district in the Docklands area of East London. “They’ve seen why ‘know your customer’ is difficult, they see why compliance is difficult, and so they come here to build a better mousetrap with all the knowledge and insight of what’s relevant for their industry.”

For the entire story from Institutional Investor, please click here