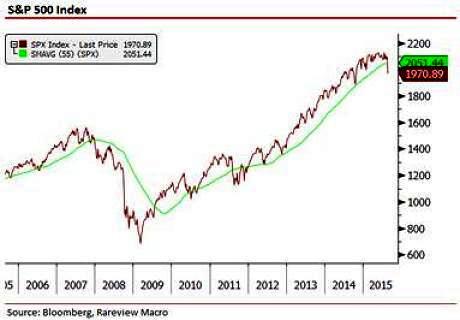 As a reminder, in the August 23rd Special Sunday Night edition of Sight Beyond Sight we wrote the following:

The most important metric we are now looking at is the 55-week moving average (WMAVG). Why? Because a one-year time frame helps smooth out the noise and separates the “daily” from “weekly” indicators for us.

Every time this “yearly” metric rolled over since 2011 when it began its uptrend it was never able to sustain the downside for more than one period. In fact, the same can virtually be said about all equity related charts beyond a “daily” period.

We are watching very carefully for the 55-WMAVG to show a deterioration for two periods in a row. At the same time, we are mindful that it is transitioning to a downward sloping path after being in the same upward trajectory since 2011.

If the weakness holds over two-weekly periods it will remove any debate over near-term or “daily” readings as the market psychology changes to the medium-term and the possibility of a whole new US equity regime. (SEE FEATURED IMAGE ABOVE)

Here is where the new month becomes, in our opinion, a lot more interesting.

Before we begin please note that we cannot take credit for this work or observation. It comes from the Scott’s Investments Blog, a blog this private citizen uses to consolidate free online investment resources and strategies, and which he finds very useful.

To illustrate our point see the below Ivy Portfolio spreadsheet that tracks the 10-month moving average signals for two portfolios listed in Mebane Faber’s book The Ivy Portfolio: How to Invest Like the Top Endowments and Avoid Bear Markets

By way of background, the “Ivy Portfolio” shows step-by-step how to track and mimic the investment strategies of the highly successful Harvard and Yale endowment funds. Using the endowment Policy Portfolios as a guide, the authors illustrate how an investor can develop a strategic asset allocation using an ETF-based investment approach.

Faber discusses 5, 10, and 20 security portfolios that have trading signals based on long-term moving averages.

To drive this point home even further Scott replicates this model for commission-free products at the major retail shops and ETF sponsors:  TD Ameritrade, Vanguard, Fidelity, and Schwab. 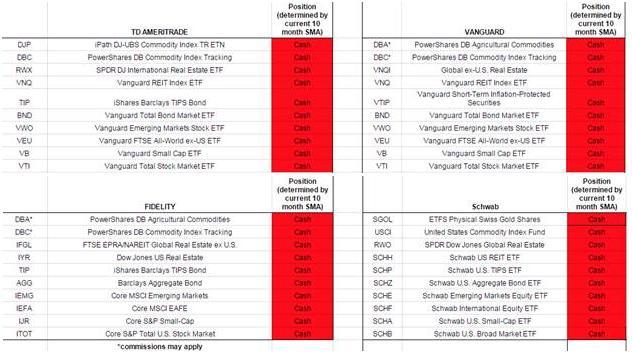 As you can see following the closing price of equities on the last day of August, the results all show the same thing – that is, there is a medium-term switch in the endowment model. While we realize this is a very rudimentary exercise it highlights three important points: 1) alongside hedge funds and retail, another marginal buyer of equities may have just walked away from the market; 2) this may prompt pension funds to re-evaluate their equity holdings as well; 3) this leaves only the sovereign wealth funds (SWF) and corporate share repurchase plans as buyers in the market. The risk is that the latter two can’t necessarily hold it up by themselves and endowments were/are a tipping point now.

The final observation to kick-off September relates to correlation and whether professionals can rely on that metric in the short-term, especially discretionary macro managers.