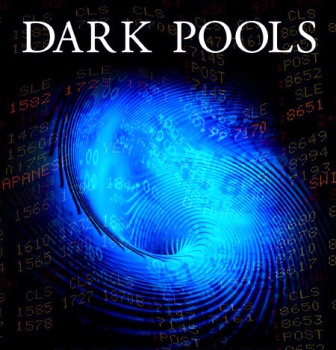 JUDGING solely by the name, stock trading in so-called dark pools may conjure up images of mysterious deals cut beyond public view. Also called simply “dark trading,” it happens when computers serve as matchmakers and bid-and-ask quotations aren’t displayed to all participants. What’s surprising is just how big the dark-trading market has become. 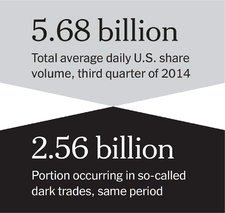 In the third quarter of 2014, the average daily volume of dark shares was 2.56 billion, accounting for 45 percent of the total average daily share volume in the United States, according to a report from the TABB Group, a financial research and advisory firm. That is up from 42 percent during the same period in 2013, according to the report.

What’s behind the growth? “The proliferation of dark volume is partly because of technological advancement and the creation of multiple trading venues,” said Sayena Mostowfi, senior analyst for equities at the TABB Group and author of the report. “The thinking is if you have the match internally, why would you go to the exchange?”

Assessing the overall impact of dark trading isn’t simple. Connecting computers with other computers might simply seem to be the height of efficiency, and no doubt it has some advantages. But while dark trading can benefit some insiders, it may cost the market as a whole.

For one thing, dark trading has led to greater fragmentation of the domestic stock market, which is now made up of around 300 venues. Only 13 of these are registered exchanges, while the rest are alternative trading systems or broker-dealer platforms, according to a recent paper by Frank Hatheway, chief economist for Nasdaq; Amy Kwan, now a lecturer in finance at the University of Sydney Business School in Australia; and Hui Zheng, a senior lecturer at the same school. This fragmentation has made it more difficult for many traders to find the best prices.

The paper concluded that, on balance, dark trading turns out to raise aggregate transaction costs and reduce the accuracy of prices displayed in traditional trading venues. The paper’s findings would seem to suggest that the more dark trading grows, the less meaningful public stock quotes are. And that possibility is something that all investors should be concerned about.

For the original article from The New York Times, click here