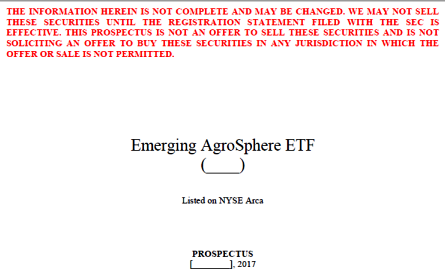 Let’s guess that more than 65% of ETF traders and investors have been clamoring for a marijuana ETF, but just when it seemed to be on the verge of happening, a bunch of folks sponsoring such an exchange-traded fund got hit with what could be a ‘bad high.’ The ink was barely dry on the prospectus filed with the SEC last week by ETF Managers Group LLC for its  Emerging AgroSphere ETF, the proposed first marijuana industry exchange-traded fund and then, “BAM!”–so-called President Donald Trump tweeted yesterday morning that he has charged so-called US Attorney General Jeff Sessions with cracking down on the marijuana industry.  Trump’s plan to stone stoners was confirmed by White House spokesperson Sean Spicer later Thursday afternoon.

Yes, that ‘s right–the creative folks at ETFMG, the sponsor behind the planned pot-flavored ETF apparently didn’t get the memo that among the “traditionalist policies” that country-club mogul-turned-POTUS seeks to advance includes cracking down on cannabis!

That’s all despite the fact more than two dozen U.S. states have legalized some form of marijuana for medical or recreational use and despite support for legalization of marijuana has risen to nearly 60 percent among U.S. adults, according to the Oct 2016 study by Pew Research Center, and let’s not forget the poll released Thursday Feb 24 by Quinnipiac University which showed 71% of Americans oppose efforts to enforce federal marijuana laws in states where it’s legal.

According to ETF Managers Group LLC, the Emerging AgroSphere ETF would give investors an opportunity to buy a group of companies making prescription drugs using cannabis extracts, selling hemp derivatives and other related stocks. The investment company did not disclose a ticker symbol, its fees or a launch date but said the fund will be listed on NYSE Arca. A spokesman for ETF Managers Group LLC declined to comment.  US AG Jeff Sessions, located sipping bourbon at a downtown DC saloon, refused to comment on the news. Also not commenting on whether the SEC filing will pass muster is recently-appointed SEC Commissioner Jay Clayton,  who until his appointment to join the cadre of other Goldman Sachs- connected top advisors to Trump was a partner at law firm Sullivan & Cromwell and a specialist in public offerings and private placements.

The only White House team member who does not stop commenting on anything is spokesperson Sean Spicer, who stated during a Thursday news briefing “I do believe that you’ll see greater enforcement of recreational marijuana and a closer look at medical marijuana as well.”

Despite initial concerns expressed by some within the industry, un-named sources close to the White House have suggested that if they haven’t already, Trump and his inner-circle, including son-in-law Jared Kushner will quickly discover that at least several of Trump’s favorite supporters have close business ties to investors in the cannabis sector, including Trump’s nominee for US Army Secretary and former New York Mercantile Exchange (NYMEX) Chairman Vincent Viola.  The ‘smart money’ with ties to Trump insiders are betting that the recent bluster will have a positive impact on parts of the industry that have been financed by Wall Street top investors, including fintech companies that are entering into the space.

Better known as “Vinny”,  Viola is the Chairman of electronic trading firm Virtu Financial, a $2.5billion market value publicly traded company (NASDAQ: VIRT) Viola, a West Point grad who became a Wall Street billionaire, withdrew his name for consideration soon after being tapped by Trump for the Cabinet-level spot. The walk back was attributed to the financial disclosure process imposed on cabinet-level designates. Viola associates from the NY Merc are investors in Americanex, aka American Cannabis Exchange, a fintech company competing with other upstarts to create a centralized electronic cannabis-trading platform. Americanex, with upwards of $10mil in backing from Wall Street executives, hopes to bring growers, packagers and distributors together in a manner much like that of the world’s leading commodities futures exchange.

““I look at this as an early Nymex,” says Richard Schaeffer, a former chairman of the New York Mercantile Exchange. “I look for this to become a very substantial matching engine bringing buyers and sellers together.”

According to a late Thursday poll by MarketsMuse of more than five dozen Wall Street ETF traders, one common theme prevailed: “Trump must be smoking crack if he thinks he can put the genie back in the bottle when it comes to commercializing cannabis.” One ETF market pioneer (who refused to be named for fear of a POTUS twitter attack) suggested “Jay Clayton could get stoned–with big rocks– if he blocks investors from taking stock in an industry that is on track to create thousands of jobs and deliver new found tax revenue that will result from this rapidly emerging multi-billion industry.”