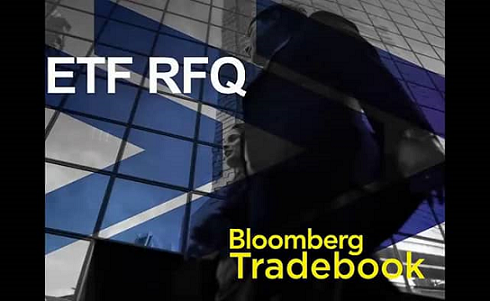 Bloomberg LP’s agency broker Bloomberg Tradebook is continuing to grab market share in the ETF execution space thanks to introducing a blockbuster approach that has proven to work across a universe of hard-to-trade financial instruments: RFQ (“Request For Quote”). The “Bloomberg ETF RFQ” tool, which, according to a statement issued by Bloomberg LP,  has triggered “a 3-fold increase in ETF volume compared to the same quarter in 2015” for the agency broker, is one that enables traders to source block trade liquidity from across a universe of liquidity providers who specialize in US-listed exchange-traded funds as well as ETFs listed in Europe, the latter of which are typically more difficult to secure tight markets for when using screen-based services that display actionable bids and offers.

Total notional value traded also tripled in European ETFs as the number of investors actively using the ETF RFQ service grew by more than 50 percent, according to a company press statement.

After launching over two years ago, Bloomberg has managed to extend its services to over 250 firms.

Market volatility and the demand for block liquidity in ETFs drove the value of the total ETF market last year. Research firm ETFGI reports that assets in global ETFs topped $3 trillion at the end of 2015.

“Institutions are finding new and increasingly strategic applications for ETFs, with 77 percent of them using ETFs to obtain Core Exposures,” said Andrew McCullum, a consultant for Greenwich Associates and author of Institutional Investment in ETFs: Versatility Fuels Growth.

I am an Issuer of a Private Placement and I have an ISIN code for that security. I want to create more awareness and List My Offering on the most widely-followed market data platforms. That’s why I will click here.

One of the stimuli behind the growth in this sector was the increase in ETF trading in the US throughout 2016. During Q1 2016, ETF assets climbed by 2.4% QoQ to $2.3 trillion in the US, which was fueled by retail channels, as calculated by Broadridge’s Fund Distribution Intelligence. In parallel to this trend, market volatility and the demand for block liquidity in ETFs also drove the value of the total ETF market to new highs over the same period.

In particular, its recent volumes have undergone a three-fold increase YoY in Q1 2016, relative to Q1 2015. In addition, Bloomberg Tradebook’s total notional value traded also tripled in terms of European ETFs, fueled in large part by the number of investors utilizing the ETF RFQ service grew – users of the service also swelled by over 50% YoY in Q1 2016.

According to Kiran Pingali, Head of ETF Product Development at Bloomberg Tradebook, in a recent statement on the business’ performance, “Bloomberg Tradebook developed its ETF RFQ service to address the unique challenges facing ETF investors in the United States and Europe, while also meeting client demand for direct access to liquidity in a greater variety of ETF products.”

“In the United States, liquidity is concentrated in the top 150 ETFs by AUM, with more than 90 percent of them trading less than a million shares per day. Europe faces its own challenges in sourcing ETF liquidity because of market fragmentation and low transparency due to deficiencies in trade reporting,” Pingali reiterated.