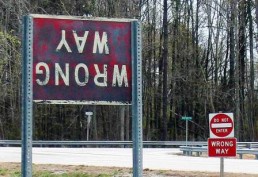 MarketsMuse editor note: below insight courtesy of Rareview Macro LLC’s global macro strategy newsletter “Sight Beyond Sight” is a great read for investment professionals who want to start off 2015 on the right leg.

An astute market practitioner that we are fond of once coined the trading phrase “Wrong Way First” (“WWF”). WWF refers to the risk the professional investment community is exposed to at the beginning of every New Year – that is, the first trade will be a reversal in the consensus positioning and inflict severe PnL duress.

While it is true that substantial wealth is only really created over time (i.e. by investing), the money management business is beholden to the Gregorian calendar and that means performance resets at the close of business on December 31st. Put another way, if you manage money for a living you’re only as good as your last best trade.

Therefore it should be of little surprise that professionals begin each January more focused on not getting caught up in a New Year’s malaise rather than trying to take advantage of opportunities by adding new risk or pressing 2014 positions. The memory of last January, a month which included the unwind of the long Japanese Nikkei and Chinese Yuan carry trade strategies and inflicted severe PnL duress, is still too fresh to forget. This is especially true considering it took the macro strategy six months to climb out of its negative PnL hole and it was only saved when the US Dollar theme sent down a ladder to climb up.

While there are many key discussions underway to start 2015 it is important to highlight that the dominant theme emerging from our discussions with any risk takers is concern over a WWF trading theme materializing. Such is the nature of this business, especially for absolute return strategies.

Our interpretation of these conversations is that the tolerance level to withstand PnL duress around any theme that is currently at a momentum and sentiment extreme – such as long Equities, fixed income duration, and the US Dollar, short Crude Oil, and underweight Emerging Markets – is very low.

As way of background if you apply this theme to actual positioning it reveals that the top WWF candidates across the major asset classes are:

The question then becomes what catalyst could trigger a WWF event and what strategy would lead it?

The catalyst, if there is one, will in our view be a break in the deeply embedded view that the US will continue to diverge from the rest of the world, both in respect to monetary policy and economic growth.

The strategy that would lead it is Equities. Specifically, a rotation into Europe from the US.

After all, investors view the US as a one-engine economic plane propping up the rest of the world and the S&P 500 is therefore the barometer for global beta.

This is where the dogmatic bomb throwers, who make a living on selling blood, and the mass media are getting it wrong. They are only willing to focus on one-side of the view – the potential for US economic deterioration and stock market weakness.

The narrowing of the divergence cannot only be a result of a reversal in the US economic data, which is all most bomb throwers and the media want to talk about at the moment. It also has to be a result of stronger growth in Europe and a change in investor sentiment on China. Otherwise, the US will still be ahead.

In our view there is a greater possibility in the first quarter that the divergence narrows as a result of a positive surprise in Europe and China rather than one-way disappointment in the US.

Our key point is that there is a real risk investors miss out on a sharp rise in Eurozone and Chinese risk assets following the announcement of QE by the European Central Bank (ECB) and a change in investor sentiment on China given the State Owned Enterprise (SOE) outperformance over the private sector, the dramatic monetary easing over the last five weeks (i.e. interest rate cut, LDR increase, etc.), and what may still come before the Lunar New Year – a Reserve Ratio Requirement (RRR) cut and a continuing Government drive to prop-up the local stock markets.

Now add in the benefits from the lower price of Crude Oil and the Bank of Japan’s even larger stimulus efforts and it is easier to understand why the “smart money” will look at the narrowing of global divergence as a two-way scenario where the US does not lead growth and sentiment to start 2015.

The overall message is that while a reversal in US economic data would be the most negative acute pressure point globally, there also has to be a probability discounted that a positive surprise in other regions will dictate whether these US consensus positions will be WWF victims.

So while everyone wants to say they like being long on European and Chinese equities versus the US to start 2015 there is a big difference between having an opinion and an actual position in the market. The key point here is that the professional community does not have anywhere near the needed long market exposure to those regions if there were to be an upside surprise, especially the US investor base, which has been selling Europe for the past few months and still getting educated on China’s new market conventions and the opportunity set.

Now many of you may ask why we have chosen to focus on Europe and Eurozone equities as a leading WWF trigger.

The answer is that a surprise in European growth/sentiment has the biggest potential to disrupt consensus portfolios as it would result in a “bear steepening” of the interest rate curves in the G3 blocks, a resurgence of Emerging Market exports, and would put a short-term floor under the Euro exchange rate. Now you can debate the degree and lasting impact of each of those moves in terms of PnL duress and duration but the fact is that this outcome would just result in pain, period.

Before dismissing this view on Europe as a possible New Year’s surprise, we would point you towards this quick list of data points to consider in your analysis. This list in our view trumps the risks over the legal decision of the ECB Outright Monetary Transactions (OMT) program, the German Bundesbank’s continued opposition to QE, or the threat of Greece leaving the Eurozone should a radical party take over the Government after the elections later this month. We know all of these negatives already and so do the prices across asset classes.

Personally, we find it prudent to analyze the risk of WWF themes and positions in a two-way framework and so should you. Additionally, you should not only remain open minded as to how or why the divergence theme could narrow but be positioned for at least one major event to materialize just as we are – that is, long on European and short of US Equities.
Net net, we start 2015 mildly bearish on the US equity market and we are looking for an initial 3-4% market pullback to discount the risk of a larger correction if corporations do not make us feel better in the second half of January. If we are wrong, the upside in Q1 should be somewhat capped and that gives us an opportunity to recapture a good portion of the option premium currently outlaid as we purchased March paper.

Below we talk about why the US equity leg is vulnerable, along with providing a view of our model portfolio:

To read the entirety of 2015’s first edition of Rareview Macro’s Sight Beyond Sight, if you do not already subscribe to this daily commentary, MarketsMuse editors recommend that you will want to start the New Year on the right leg and secure a subscription. Available options: (i) Free 15 day trial, (ii) Monthly @ $300/per or annual subscription for $3000.00. For more info, please visit the publisher’s website at www.rareviewmacro.com