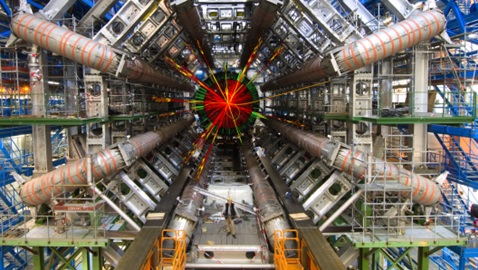 MarketsMuse Fixed Income update comes consequent to the Fed’s June 5 release of Employment Data, and below is courtesy of extracted comments delivered to institutional clients of Mischler Financial Group under the banner “Quigley’s Corner” and authored by Managing Director Ron Quigley,  Head of Fixed Income Syndicate for the securities industry’s oldest and largest minority firm owned and operated by Service-Disabled Veterans. Mischler has been awarded “Best Research-BrokerDealer” for the past two years by The Wall Street Letter.

The large Hadron Collider in Geneva’s CERN Institute or the European Organization for Nuclear Research took ten years to build.  It’s the largest single machine on our planet. 10,000 scientists worked on it from 100 countries.  Talk about diversity and inclusion!  It rests as deep as 825 feet underground and its circumference is 17 miles. It was created, in essence to help find answers to questions that have bugged mankind like “where do we come from?” or “How was the universe started” among many others.  CERN hires roughly 90% of the world’s particle physicists otherwise known as the smartest people on earth.  My late father-in-law was its director and worked there for over 40 years. They are exacting people, detail oriented and with no room for error.  Which leads us into today’s Op-ed concerning U.S. economic data and its vast differences but equally important impact in today’s inextricably global-linked world economy.  Like the circular Hadron collider – what goes around comes around. So, what happens with rates, the EU, Greece, China and Ukraine, terrorism and/or Nationalism can all have an explosive domino effect.  Given that our current rate situation seems tenuous with equally profound global ramifications, I thought the analogy appropriate.

Below is the Hadron Collider that sends billions of protons on a direct collision course at the speed of light to help discover new physics and answers to eternal questions about our universe:

……and ..here’s something you’re all familiar

with – the PX1 or US Treasury benchmark page on Bloomberg.  It’s the frontier of capitalism.  Because of its size and liquidity USTs are used to measure credit risk. Thanks to their inverse relationship between bond valuations and interest rates these instruments are used to indicate changes in interest rates which have the potential to send our world’s economies on their proverbial backside at a moment’s notice.  It is the brain center and money center that affects the $82.2 trillion worldwide bond market.  It does much more too.  It’s the crossroads between capitalism and world politics and at the center of global money wars.

So, the day after the IMF’s LaGarde implores U.S Fed head Janet Yellen not to raise rates until mid-2016, we get today’s eagerly anticipated employment data that surprised rather big time to the upside.  Nonfarm payrolls beat estimates by 54k to 280k vs. 226k. Some asked, “how then can the Underemployment Rate have ticked up 1/10 of one percent to 5.5% vs. 5.4%?  Great question.  Here’s why?  Remember all those times I ranted and raved about the Labor Force Participation Rate before they started getting posted?  You know, the unemployed who maxed out their benefits and stopped looking for work and as a result, the Bureau of Labor Statistics stopped counted them?…..as in literally being vaporized from the numbers? Well, those people are returning to the work force and as soon as they begin looking they are counted as part of the domestic labor force although many have not yet found jobs.  It tells us they think things are getting better out there and are returning.  Also Household Employment surprised to the upsize 272 vs. 192.

Now follow the train of thought as we circulate around the collider – There are times when product heads need to show profits.  Marking to market is an art not a science. Let’s say at the end of a random trading session a trader’s long position in “ABC” carries an indicative market of 105/100. At the close of the session the trader valuates conservatively at the bid side level or T+105.  If the trader receives a call from the boss saying something to the effect of , “I need to show more money today” well, the trader makes some calls and WILL invariably find someone, somewhere who might pay a bit more or substantiate higher true value motivated by someone saying “I think I can bring out 10mm tomorrow. I have someone looking for that name, credit, and tenor, yadda, yadda, yadda…..I dunno around 100 over” Suddenly that position is marked at T+100.  Voila now, you’re in the black – on paper that is and your boss is happy!  One doesn’t know the value until it’s sold but that’s what trader’s do. Do that for several pages of bond positions in small fonts and the numbers add up unless of course the market turns against you days later and you have to be more realistic.   That’s a VERY simple example of course.

Here’s my point – the numbers game is an art not a science.  Relative or fair value can be narrowed down to a basis point.  I worked with one of the all-time best new issue pricing gurus in our market’s history who’s name I will withhold but I think many of you know who it is.  He’s still around.  He would price deals right on “Q” shall we say winning and stealing mandates away by splitting basis points.  But that was also in the days of bought deals versus best efforts transactions.  Pressure brings out the best in all of us!

The point is “fiddling” with numbers is, in fact, an art and a science!  If Christine LaGarde sets a new precedent by publicly asking/advising the Fed’s Janet Yellen to hold off on increasing rates until mid- 2016, the Fed will definitely sense an urgency to that request.  But will she and the Fed acquiesce?  Policy makers and the current Administration are aware of the potential disaster that is the EU.  So, it’s easy, especially dealing with a monster bureaucracy like the U.S. Bureau of Labor Statistics to “interpret” shall we say, numbers a bit differently in order to optically deliver numbers suggesting our economy might not be where we think we need it to be in order to justify holding off on an earlier than desired rate increase, or vice versa.

With so much news out there many have no clue that, for example, an emergency Federation Council meeting was called in Moscow two days ago.  The last time such an emergency Council meeting concluded, Russia essentially announced it was annexing Crimea.  It remains a historically unusual and rare event.  There could be myriad reasons for the meeting being called so hastily the conclusion of which remains shrouded in mystery.  The lack of transparency or a free Russian press is call for caution.  The point being,  there are a lot of moving parts and global event risk factors that can have major impacts on our global-linked world economy, Russia among them, that have potentially drastic repercussions for all.  In Russia’s case, it’s thanks to Vlad-the-Terrible.  As Senator John McCain famously quipped, “The President of the United States believes the Cold War is over; Fine! – it’s over!.  But Putin doesn’t believe it’s over!”

What if the U.S. sticks to its guns that a rate increase “will be data dependent”, what if the data is really good?  They’ll need an out to not raise rates.  All I’m suggesting is that it’s an easy proposition to do so.  After all politics, unfortunately rules and that’s where art smashes head on into science and creates explosions of a different sort other that of the Hadron collider.  The resulting consequences of which will lead all of us to the conclusion that we each already know too well…….“politics is the problem”  until, of course that problem is corrected!