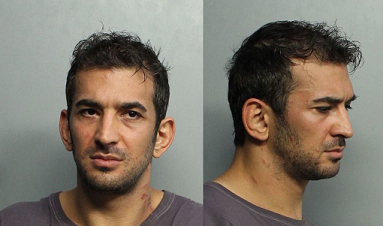 Andrew Katz, the self-described CEO of “crypto trading firm” Seaquake.io, an individual whose escapades for defrauding investors and threatening those who have filed complaints against him have been profiled via this platform and other platforms for several years.

Or, the edited crib notes version is below.

ON ABOVE DATE AND TIME THE FOLLOWING VICTIM OFFICERS RESPONDED TO A DOMESTIC DISPUTE INVOLVING THE DEFENDANT AND HIS PREGNANT GIRLFRIEND AT THEIR APARTMENT AT ABOVE LOCATION, MIAMI POLICE CASE NUMBER 2104010020299.

Despite a February 2022 conviction for assault in New York City (for which he purportedly failed to appear for sentencing), Miami-Dade County authorities released Katz, pending an upcoming court appearance, after he posted $75,000 bail.

Since the April 2021 arrest in Miami, Katz has undertaken a social media campaign to publish multiple ‘interviews’ on blogs that enable people to promote themselves in exchange for a fee. To deflect negative stories, he has featured himself as a “successful crypto industry entrepreneur”. Per the lower left image, one individual who was recently solicited by Katz has cried “Bullshit!”

Below is the warning alert submitted by that individual in August 2022 via “Dirty Scam.com” a blog that ‘outs’ scamsters.

Editor Note: Katz has systematically rebutted similar accusations by impersonating victims and those associated with the victims by posting “comments” that include an array of defamatory and false allegations in an effort to discredit the accusers. At the same time, and despite Orders of Protection issued by courts in three jurisdictions, Katz has advanced retribution campaigns using burner phones and anonymous email accounts to harass, physically threaten and intimidate those who have brought charges against him. What a brave guy!

Andrew Katz of Seaquake recently contacted me for investment and loan purposes. We met at a party and talked about our businesses. He was interested in what I do.

After a few drinks, he suggested that he could help me in many ways in my business. Talking about his outstanding achievements, he said his company has a huge turnover and is a great player within the crypto industry.

He did tell me about his partner. If I correctly remember the name, it was Matthew Krueger. Although I did not meet this man, Andrew had painted his picture for me. We exchanged numbers and parted to our ways.

After a month, maybe, Andrew called. I recognized his voice right away. He said he was seeking some money for a considerable investment and would offer me a great deal in the profit earned. I was already excited about what he was offering.

But the amount was too huge. So, I asked him to arrange that kind of money for a couple of weeks. He was in a hurry and said that he could not wait. Then I asked him for two days. He sounded calm but still insisted on making it faster.

That was the red flag for me. In those few minutes, I did not ask about any paper works or any roadmap about the investment plan he had. But then it struck me mainly because he sounded too aggressive with the deal.

I started to Google him on the internet and his company. I was shocked that he was a fraud and a big liar. He has many felony charges to his name, and he is a wanted criminal. I called my lawyer right away and asked him to research this guy. To my surprise, he already knew Andrew.

I was saved. He told me everything about Andrew. This guy had felony charges for duping a family in Florida, assault charges, and whatnot. I blocked his number. However, I got a call from an unknown number after two days.

When I answered, it was Andrew. He started abusing me for leaving him in between a great deal after making promises. Without letting me speak, he went on talking rubbish. In the end, I shouted and asked him to calm down. I told him everything about what I knew.

He disconnected the call and never called back. This proves how great of a con artist this man is. He is a great liar and can easily make fake promises and boast about his non-existent company for hours. He can ruin your life without thinking about the consequences.

I give that to him. It is not easy to fool me, but he got me for some time. I am sure I had my lesson learned. And I am not going to believe anything he says anytime later. Stay away from this filth. He can burn your life instantly.

The individual who posted this experience did not provide his/her name and presumably posted anonymously in order to protect himself/herself from a barrage of retaliatory attacks from Katz.

All of this begs the question as to what other investors, including Crypto Industry Pioneer Brock Pierce and Blockchain Founders Fund, portrayed on the Seaquake.io website, have to say about all of this.