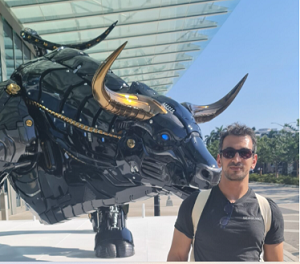 Andrew Ross Katz (aka Ross Katz), founder and CEO of Seaquake.io, a self-labeled “crypto trading firm” and “B2B service for cryptocurrency exchanges”, along with his partner, the firm’s Chief Financial Officer, Matthew Krueger of San Francisco, were first profiled by this outlet in September 2019 for their roles in defrauding a Family Office out of several hundred thousand dollars.  And, while Katz remains at large–he continues to target a growing list of other unsuspecting victims.

The gory details of that incident and the series of blatant misrepresentations made by those individuals became a matter of federal court record when a federal lawsuit was filed in Florida’s Middle District Court, merely several weeks after the ink was dry on the investment agreement with Katz, Krueger and the assortment of Seaquake connected shell companies under their control.

The supporting evidence to allegations of investor fraud made by the plaintiffs included investor documents executed by Andrew Katz, a smorgasbord of other evidence underscoring blatant misrepresentations and phony assertions made by Katz and Krueger as to their personal and professional backgrounds, the investment itself, along with an extensive file of email and other digital communications sent by Andrew Katz, and with copy to Krueger.

The preponderance of the incriminating evidence led the federal court judge to conclude the defendants had ‘touched the third rail’ of federal civil statutes pertaining to investor fraud and securities fraud. To mitigate further harm to investors, the judge issued an emergency temporary restraining order (TRO) that put a freeze on the variety of corporate bank accounts held by the web of Seaquake corporate entities controlled by Andrew Katz and Matthew Krueger, as well as the known personal bank and brokerage accounts held by Andrew Katz and Matthew Krueger. Days later, Katz and Krueger moved the funds again, first to cryptocurrency platform Coinbase, and then to cryptocurrency custody and trading platform, Binance.*

In view of the brazen nature of the fraud perpetrated by Mssrs. Katz and Krueger, this financial industry- published a series of follow-on articles profiling the activities of this ‘enterprise’, as well as Katz’s sordid prior criminal history, including recent Orders of Protection issued against Katz, a litany of criminal arrests across four different states over multiple years on charges of harassment, aggravated assault, weapons charges, breaking and entering, and stalking. The most recent known arrest occurred in April 2021 and took place in Miami, Florida, when Katz was charged with 11 Counts, including multiple charges for assaulting a police officer:

A February 2022 conviction for assault charges in New York stemmed from his March 2020 arrest in which Katz assaulted his now estranged wife. Law enforcement sources have indicated there is now a subsequent warrant for violating the second Order of Protection, and a fugitive warrant issued in New York for his arrest. Katz failed to appear for sentencing on the assault conviction, then fled the jurisdiction, and supposedly abandoned a $100,000 cash bond. The Manhattan District Attorney’s Office would not comment or explain why those criminal records are sealed.  The New York Criminal Court records are also sealed.

This platform also pointed to a conclusion by another expert that Seaquake principals committed SBA Loan Fraud relating to a forgivable PPP loan granted to the company in the midst of the pandemic crisis. Public records show that an application was processed and a loan received by Wyoming-registered Seaquake entity “Seaquake OPS LLC” that listed employees of the company which included Katz’s then-estranged wife, who was listed as “Creative Director”. According to informed sources, “she was never an employee, and never performed any work for the company”. When asked why that individual’s profile appeared on LinkedIn as “Creative Director” for Seaquake shortly before the loan application was submitted, the source stated “She had never created a LinkedIn profile for herself, any less one that would include a fictitious employment history.”  The corporate registration for the Wyoming-domiciled Seaquake entity that received the SBA PPP loan was dissolved four months after Katz and Krueger received the funds from the SBA.

Cryptocurrency Meltdown Calls for a Re-Visit

As fortunes implode and the crypto industry becomes un-hinged, the cause and effect of scammers, charlatans, and Ponzi-style schemes

The intent of our editorial team has been to protect other investors from being duped by Katz and Krueger, and from any others advancing similar frauds against unsuspecting investors. In our expose, we also spotlighted several “legitimate” crypto and digital asset investment firms that, according to the Seaquake.io corporate website, have purportedly invested in the Seaquake enterprise without bothering to perform basic due diligence that would typically include interrogation of court databases and criminal background searches.

The Seaquake website had (until recently) displayed Pierce and BFF Managing Partner Aly Madhavji as Advisors to the firm.  Other investors displayed include “SOSV ChinaAccelerator”, a China-based VC and PE firm, Sydney; Australia-based alternative asset investment firm “Artesian Ventures”, a firm called “ScaleX”, and a little-known investment firm “Red Spark”.  The latter is operated by a Stephen Gill, who resides in New York and Puerto Rico. Gill is also displayed as an Advisor to Seaquake. These actors either purposefully chose not to perform a scintalla of due diligence for their own reasons, or simply overlook the red flags before they deployed their respective investors’ capital to the Seaquake enterprise.

Since April of this year, four different “pay-to-promote yourself” blogs have published “interviews” of Katz, each of which profiled him as a “crypto entrepreneur”. Each of those obscure blog platforms  (“TechBullion.com”, “Laptopsforless.com”, “ScoopIt.com”, and “VentsMagazine.com”) display purported interviews by “journalists” (who each use pseudonyms,) and showcase background information for Andrew Katz that among other “virtues”, includes him (i) “having worked as a securities industry trader and traded “billions of dollars”; (ii) that he “earned a Masters in Finance from Harvard University”, and (iii) that “Seaquake has been generating profits within fifteen months of being created in 2018.”

All very entertaining claims; yet all are false.

UBS, the other financial industry firm that Katz claims to have worked for stated “we cannot confirm (or deny) having employed him.

2. “Academic Pedigree” “Harvard Masters in Finance”. Harvard University records indicate Katz did attend an online course for 1 year and earned a Master of Arts, (not Finance); comparable to degrees offered by the online University of Phoenix. As to other academic credentials, during his youth, Katz did briefly attend “World Wide Association of Specialty Programs”. This ‘school’ is “in the business of serving desperate parents of troubled youths and specializes in improving the students’ aberrant social behavior..”

3. “Business Success“. The business he claims to be “generating profits since shortly after we were formed..”?

Katz disputes this himself in documents obtained from the civil lawsuit in Florida. Katz submitted an affidavit stating “investors were told the business is a start-up, does not generate revenue [no fewer profits] and is not expected to until first raising several million dollars in development capital.”

4. “Industry Entrepreneur.” Katz and Co also maintain personal and company Twitter accounts; each of which falls into the realm that Elon Musk has used to walk back his bid to acquire Twitter; the percentage of phony Twitter accounts is exponentially greater than what Twitter has stated in corporate filings.  In this case, Katz’s personal Twitter account, @AndrewKCrypto (https://twitter.com/AndrewKCrypto) indicates his having 5346 followers. A simple interrogation discovered that all but ten of those followers are legitimate Twitter accounts. The rest are “bots” and all of those accounts are less than several months old, none have more than 5-10 followers; a classic ‘tell’ for those familiar with Twitter Inc.s failure to remove phony accounts.  The same seems to be true for the Seaquake company Twitter account (@_Seaquake_); the account boasts nearly 5000 “followers”, yet 98% of which Elon Musk would say are “Phony Followers! All Bots!”

MarketsMuse has made repeated attempts to contact each of the investors displayed on the Seaquake website. Earlier this year, Ali Madhavji of Blockchain Founders Fund indicated that “BFF has no involvement with Seaquake”, yet his firm’s name remains prominent on the front page of the Seaquake.io website.

A representative of Percival Capital replied to us with a statement that “They [Seaquake] were not authorized to display Mr. Pierce on their website, and we requested them to remove that reference.” The Percival Capital representative did not dispute that Pierce and his firm are in fact investors. “SOSV” Managing Partner William Bao Bean stated that his firm is in fact an investor, but would provide no other information. Stephen Gill, nor any other individuals who seem to be affiliated with Red Spark or individuals associated with “Scalex” replied to a request for comment.

Law enforcement officials from Arvada, Colorado, New York, Los Angeles, and Miami are all familiar with Katz. They are aware that he uses aliases “Ross Katz” and “Stark Katz”, and of the assortment of harassment charges stemming from abusive messages and death threats delivered via email and burner phone [“purportedly’’] sent by Katz, each in retaliation against a variety of individuals, including those who have filed charges against him. Knowledgeable officials have suggested that ‘the tone and tenor of the messages, the history of arrest charges, the serial nature of his actions, and other corroborating records makes it clear that he [Katz] is a dangerous individual who continues to commit brazen acts.’  Added one expert, “It doesn’t take a trained criminal profiler to conclude that this individual will continue to pose a threat to others until such time as someone from the law enforcement community or a regulatory agency takes proactive measures.”

Begging the question as to how it is possible that Katz and his accomplice Matthew Krueger remain at large.  Three former government prosecutors who are familiar with the matter expressed being “baffled” by the fact that Katz has been repeatedly arrested, but not successfully prosecuted and jailed. As to Katz’s current whereabouts, he was last sighted in April of this year, while mingling with Seaquake “co-founder” Dylan Knight at a Miami crypto industry conference. One individual who is known to be an acquaintance of Katz, and who requested anonymity, suggested that “he might be in a medical clinic and being treated Monkeypox.”

*The above-referenced Federal Civil Litigation was “dismissed without prejudice” on a technicality after the presiding judge ruled that the Florida Middle District Court had “no personal jurisdiction” over the defendants. Despite plaintiffs submitting evidence that Katz maintained a voter registration in Florida and that one of the Seaquake entities was incorporated in Florida, the judge recommended to plaintiffs that they re-file their action in a different court. One attorney who is only tangentially familiar with the case stated “The statute of limitations is still open for such an action to be advanced in the State of Colorado or the State of California.“