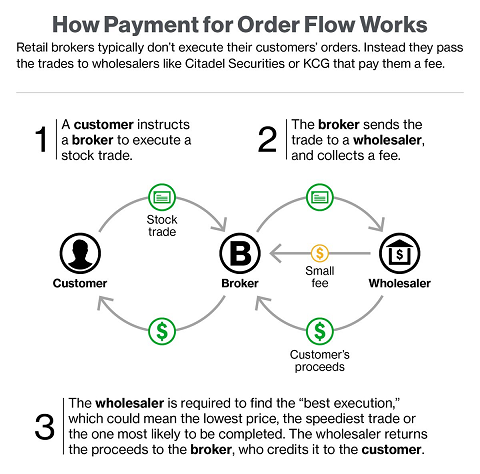 In a July 18 NYT op-ed piece “Wall Street Profits by Putting Investors in the Slow Lane” submitted by Jonathan Macey, a professor at Yale Law School and David Swensen, the chief investment officer of Yale University, the spirit debate topic of payment-for-order-flow schemes, aka rebates paid by the various stock exchanges to retail brokers that route orders to those platforms is once again brought to a public forum. MarketsMuse curators and editors have profiled this issue more than once during the past years, and each of those posts have earned us lots of visitor traffic from Washington DC outlets, academics and a multitude of sell-side firms that are loathe to let it be known they are getting paid a kickback for routing orders to exchanges, but not feeling obliged to share those rebates with their retail customers.

Mssrs. Macey and Swensen frame the issue in what is arguably a clear, crisp and straight forward manner:

Institutional brokers are legally obliged to execute trades on the exchange that offers the most favorable terms for their clients, including the best price and likelihood of executing the trade. The 12 exchanges, most of which are owned by New York Stock Exchange, Nasdaq and Better Alternative Trade System (BATS), along with the Chicago Stock Exchange and the Investors Exchange (IEX), are supposed to compete to offer the best opportunities.

But that’s not what is happening. Instead, brokers routinely take kickbacks, euphemistically referred to as “rebates,” for routing orders to a particular exchange. As a result, the brokers produce worse outcomes for their institutional investor clients — and therefore, for individual pension beneficiaries, mutual fund investors and insurance policy holders — and ill-gotten gains for the brokers.

Although the harm suffered on each trade is minuscule — fractions of a cent per share — the aggregate kickbacks amount to billions of dollars a year. The diffuse harm to individuals and the concentrated benefit to Wall Street create yet another way in which the system is rigged, justifiably eroding public confidence in the fairness of the financial system.

That said, MarketsMuse takes this view: The regulation of “market structure” falls on the SEC. Well before anyone even envisioned the  nightmare of a Trump-led US Government administration, it has always been the SEC’s mandate to ensure PUBLIC investors are treated fairly and properly. Somewhere along the line, the moral compass got lost by the boy scouts and girl scouts at the SEC, or maybe they never had one considering the legacy of that failed agency. After all, it was  Joe Kennedy, Sr. who was appointed to be the first person appointed to run that agency when it was established in 1934. But, whether or not Kennedy Sr.’s  DNA was stuck to the walls of that venerable institution and has permeated ever since, the fact is that the securities industry and its lobbyists have served as the Oz Behind the Curtain for decades.

As technology evolved and ‘innovation’ came to the stock markets, brokerage firms found themselves suffering from having to offer increasingly lower commission schemes in a ‘race to zero’. Whenever industries evolve to point where services provided become nothing more than a commodity, it should be no wonder to anyone that creative folks will step in and figure out how to remake those business models and monetize new models. Hence, the existing payment-for-order-flow market structure that permeates throughout the US equities markets (and now emulated by players in other product areas) should be of no surprise to anyone. After all, few who work within the financial services sector could not survive if they don’t embrace Gordon Gekko’s decree that Greed is Good. Don’t believe that? Well, this ‘blog post’ would extend for tens of thousands of words and hundreds of links to news articles profiling the travails of financial industry gurus that got ‘busted’ for playing hide the banana with their customers. Tens of Billions of Dollars in Fine Payments have been made by the Industry for misleading, duping, defrauding and cheating customers–many of whom were innocent, unsuspecting and not completely stupid; they were simply cheated by folks who are too slick for their socks. (Editor note: To Donald Trump, Jr.–this article didn’t envision referencing you, but that last comment seemed applicable, if only as a metaphor.)

It boggles the mind of this industry veteran when observing that the topic profiled by Yale’s Macey and Swensen has yet to be addressed by regulators. In fact, those regulators have consistently enabled the ever-more-sophisticated schemes that its industry constituents have devised. (Can you spell M-a-d-o-f-f?)

In an informal survey of 100 retail investors conducted by MarketsMuse, 70% of those individuals had ‘no clue’ that their brokers were receiving kickbacks from industry platforms that pay those brokers to receive the respective customers’ order flow. The remaining 30%  were “somewhat aware” and when the issue was framed for them, they were unanimously vexed by the fact the brokers charged them a commission and also earned a kickback from someone else.  When asked to review statements, those same folks took out a magnifying lens and located the small print, but all asked rhetorically, “Why don’t I get a piece of that kickback? After all, its MY order!”

OK, those same individuals did acknowledge that commission rates for executing stock orders have come down sharply during the past 10 years. “Hoorah to that ‘progress'” say those who love Schwab, Fidelity, eTrade and TD for offering “Only $5.99 to trade 1000 shares!”,  but when pendulums swing so far, something is awry. Then again, when the likes of FB, LinkedIn and the thousands of other platforms that offer something for seemingly nothing are chastised for ‘selling customer data to advertisers’, perhaps the guiding principle should be- If its too good to be true, it isn’t.