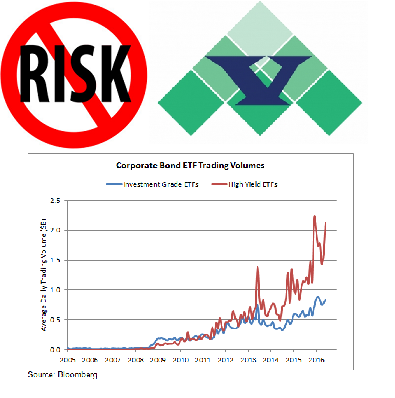 During the better part of three years, MarketsMuse Fixed Income curators have often pointed to concerns expressed by market professionals who argue that the unfettered growth of corporate bond ETFs are masking the inevitable likelihood that once interest rates begin to rise, buy side fund managers fearful of mark-downs in their corporate bond positions will push the ‘sell button’ en masse to limit the P&L hit. Those in the camp expressing such concerns, which includes Virtu Financial, one of the most successful electronic market-makers in the industry, believe that such a mass exodus will wreak havoc on the now $8.4 trillion US corporate bond ecosystem* (*data according to Sifma), where new issuance for 2016 has just surpassed 1 Trillion dollars, and is a marketplace that since 2011 alone, has grown nearly 50% in terms of notional value and number of outstanding issues.

Per one senior market risk expert familiar with the thinking at Virtu, “Their’s isn’t simply a view typically attributed to academics, who have increasingly warned and have been equally derided by ETF lobbyists for suggesting a secondary market meltdown in corporate bond ETF products is inevitable when rates rise. Instead, Virtu has concluded that for those who make a business of ‘taking the other side’ of corporate bond exchange-traded funds, whether investment grade (e.g $LQD) or high yield themed (e.g $HYG), will find themselves playing a game of musical chairs, but there will be no chairs available for anyone when the music stops and traders will find themselves unable to find any liquidity in the respective ETF underlying constituents.”

One of the world’s largest electronic market makers won’t touch increasingly popular corporate bond ETF products because the underlying securities are too hard to trade.

Although New York-based Virtu Financial Inc. buys and sells everything from stocks to government bonds and futures on more than 235 exchanges around the world, it shuns products linked to corporate bonds like the $15 billion iShares iBoxx $ High Yield Corporate Bond ETF. The reason, according to Chief Executive Officer Doug Cifu, is that it’s too hard for Virtu to precisely hedge the trades.

“It’s definitely concerning you don’t have full and unfettered access to the underlying,” Cifu said, speaking at a Security Traders Association conference in Washington on Thursday. “That’s troubling.”

During the fourth quarter of 2015, TABB Group interviewed key US corporate bond market participants across buy-side, sell-side and specialized trade service providers.Across all segments covered within the survey, participants’ responses reflected dim expectations for liquidity available in the US corporate bond market for 2016. Apart from the threat of a “large scale macro crisis,” the most serious threat that participants identified was the ongoing decline in immediacy (balance sheet) provided by dealers.

Other market makers including Citadel Securities and Susquehanna do trade the ETFs, but Virtu’s absence is notable given how dominant the company is in other areas. Cifu said Virtu does trade ETFs containing U.S. Treasuries, including the ProShares UltraShort 20+ Year Treasury.

To read a Bloomberg Markets profile of Virtu, click here.

Virtu’s strategy involves arbitraging price difference in related assets, quickly entering and exiting the positions. With fixed-income ETFs, the company is concerned it can’t get access to the related bonds fast enough. Market makers with longer trading time frames may be less reluctant. Virtu’s line of thinking echoes worries elsewhere in the industry. Shares of the funds are often easier to trade than their underlying bonds, potentially posing a risk if there’s a sudden rush for the exit.