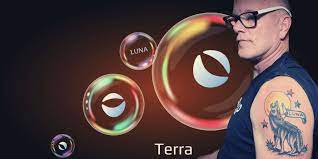 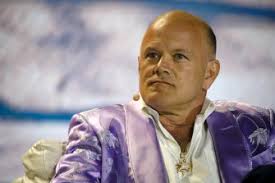 For those not aware, Michael Novogratz, the famed crypto industry ‘pioneer’ and crypto evangelist is a former Goldman Sachs ‘global macro wunderkind’ who then did a stint at asset management firm Fortress Investments, which cratered during his watch, turned into a bitcoin evangelist and became the “bitcoin billionaire” brains behind “crypto investment firm” Galaxy Digital. He has a long history of making big bets with other people’s money. Unfortunately, his gambles have often turned into snake-eyes when the dice stopped rolling.

But that’s OK, his personal investment accounts weren’t exposed to the slaughter that was wreaked on Fortess’s institutional investors when his misguided bets on Brazil currency back in 2014 turned into sour coffee grinds. The losses on bets he made or oversaw devastated Fortess, yet the firm managed to extricate its stakeholders through an IPO, enabling Fortress executives to cash out with tens of millions of dollars each.

“At Fortress troubles first surfaced in the macro funds run by Novogratz, a man known for his glitzy lifestyle, complete with a Tribeca duplex once owned by Robert De Niro and a flamboyant wardrobe featuring diamond-studded belts and cowboy boots.”

He quit Fortress to start a firm to invest his own wealth. He kept investigating bitcoin and other cryptocurrencies, becoming more serious about the investments.

Over time, Mr. Novogratz came to see them as a “really cool new technology” that was likely better capable of storing value amid rising inflation than alternatives, he said at a recent conference. Soon, he was a true convert, buying $10 million of bitcoin and another cryptocurrency called ether partly because he sensed a lack of trust in global currencies, he said.  See https://www.wsj.com/articles/mike-novogratzs-crypto-comeback-faces-a-trial-by-fire-11654315211 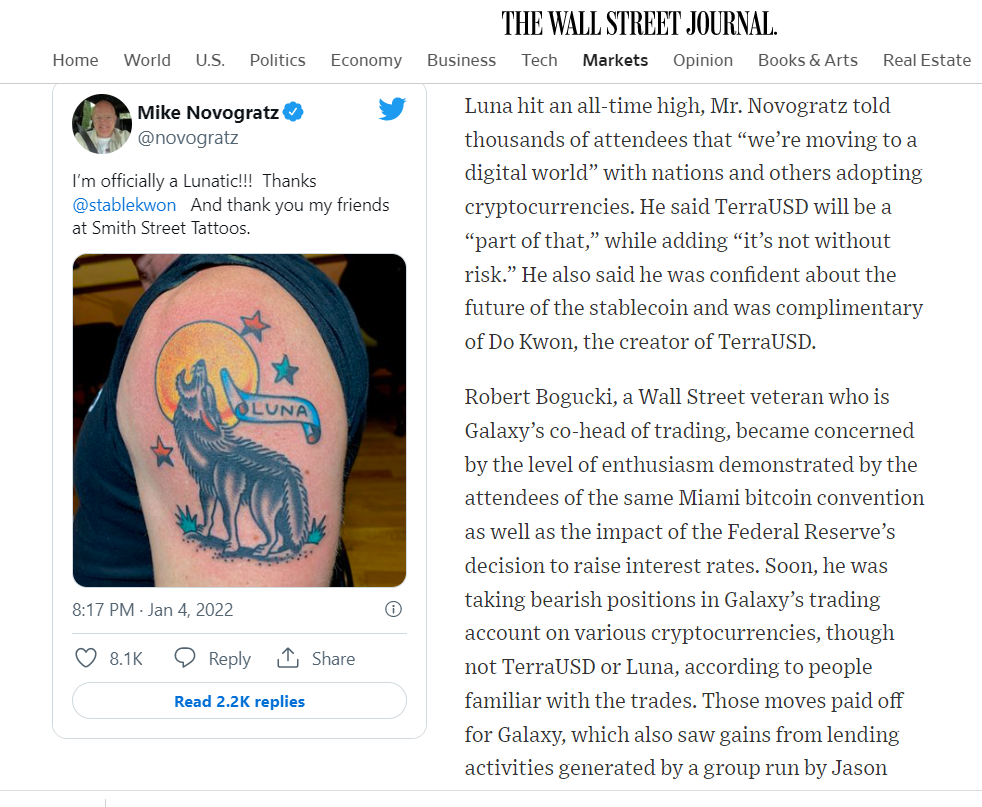 During the past five years, Novogratz has become the poster child for crypto and bitcoin, “talking his book” at every opportunity, and helping to lead thousands of blind mice investors to pump up the price of bitcoin and to plow hundreds of millions of dollars into his firm Galaxy Digital (OTCMKTS: BRPHF) so that he could “invest for them”—while reaping fees that would make most people’s eyes pop out.

Throughout the unprecedented bubble building in crypto “currencies”, Novogratz and many other evangelists/promoters including Jack Dorsey, Elon Musk, Michael Saylor, Disney film star Brock Pierce, the Winklevoss twins, investing genius and former Donald Trump PR trumpeter Anthony Scaramucci, Internet Billionaire and Game Show Host Mark Cuban among so many others, have proclaimed that Bitcoin, Ether, Tether, and many others represent “a store of value”, “a hedge against inflation”, “a safe haven when traditional financial assets (stocks, bonds, sovereign currencies) suffer from global economic and geopolitical turmoil.” All the crypto evangelists, and in particular, famed hedge fund manager Ray Dalio, proclaim that Bitcoin and other so-called currencies represent the “digital version of gold“; which many global investors believe to be a useful hedging tool that should be part of every portfolio.

So let’s take a measure. Since January of 2022, the US equities markets (as measured by S&P 500 index, DJIA, as well as markets in many other advanced countries have suffered generational losses in share prices. The declines of 25% in value in equity prices are thanks to an inflationary spiral caused by supply-chain challenges brought on by Covid 19, monetary policies that created historic government hand-outs in an effort to stem the impact of Covid-19, along with a global geopolitical crisis thanks to Russia invading Ukraine, and a sober reaction to over-inflated enterprise valuations and hysterical stock market speculation. The combination of these events has almost no comparison when looking back five decades.

Yes, stock markets are cyclical and suffer bear markets and crashes; some short-lived, others longer-lasting. The global benchmark S&P 500 is off 24% from its Dec 2021 all-time high; the German Stock Market Index has shaved 20% from its high, and the Shanghai Stock Index is off 10%. Gold, the universal hedge against both geopolitical crisis and inflation, is up a scant 1% YTD. Bitcoin, the proclaimed “hedge against all of the above-noted crisis events” has plunged 69% from its stratospheric all-time high.

Among other investments, Mike Novogratz, via Galaxy, was a big backer of Terra Luna–a platform based on Tether, the digital asset platform that was co-founded by another crypto genius, former child-actor Brock Pierce. He’s a self-proclaimed billionaire too–and many refer to him as the “Prince of Puerto Rico” in view of the real estate he has acquired and the influence he has over the swarm of crypto ‘entrepreneurs’ who have taken over much of that island.

Like Novogratz, Pierce is an active investor in a broad swath of crypto initiatives and start-ups, one of which is a phony funny, yet apparently, a fraudulent firm calling itself Seaquake.io, for which Pierce is identified as an advisor. It is also a criminal enterprise that MarketsMuse has profiled for the past two years, and its founder Andrew Katz, is now purportedly a fugitive from justice.

Let’s not forget that investments made by Galaxy included Novogratz and his partners receiving ‘tokens’ issued by the companies they invested in that were priced at pennies. Those tokens were no different than penny-priced ‘warrants’ given to underwriters of traditional IPO offerings.

After pumping the news of those investments, those tokens turned into ‘real money’ for the promoters—who cashed out into the frenzy and bought mansions and boats; reminiscent of the antics made famous by the infamous  Jordan Belfort’s firm Stratton Oakmont—the underwriter for the 1993 IPO of shoe company started by Steve Madden.

[Belfort and Madden were then convicted of securities fraud and both went to jail. Flash forward to 2021, Jordan Belfort repurposed himself into a crypto evangelist and is minting millions by ‘advising’ people on how and what crypto deals to invest in.]

Bloomberg Technology- Michael Novogratz, a long time proponent of cryptocurrencies through his firm Galaxy Digital Holdings Ltd., said Bitcoin and other digital coins have become “an institutional asset class” and banks are “frantically” trying to get in on the action.

Mar 31 2022 In Midst of Crypto Sell-Off, Novogratz Says “I’m More Constructive about the market than I was previously..” Michael Novogratz, the billionaire cryptocurrency investor who leads Galaxy Digital Holdings Ltd., said that while he still expects a volatile year, he has become more “constructive” about digital-asset markets than he was earlier.

“It wouldn’t surprise me to see crypto significantly higher by the end of the year,” Novogratz said during Galaxy’s earnings conference call on Thursday. “Given the adoption cycle I’m seeing, given the way markets trade, and how I see new people wanting to get in, the innovation we’re seeing in web3 and the metaverse space, I’ve gotten more constructive than I was at the beginning of the year.”

No surprise then that soon thereafter, while talking up bitcoin investing and predicting meteoric price rises, he was selling stakes that his firm Galaxy Digital held in various “cryptocurrencies”.  Nice.

May 9 2022 CEO Michael Novogratz highlighted weakness across crypto and equity markets during Galaxy’s earnings call Monday, though said he isn’t “panicked by any stretch.” He added that his recent investor meetings point to growing adoption, and noted that “crypto as a tech play” is gaining momentum.

“Volatility will continue,” according to Mike Novogratz, although he said he expects bitcoin to hold around the $30,000 level and ether to stick around the $2,000 level.

The crypto proponent stated that the two leading cryptocurrencies would hold strongly at those levels while noting that the benchmark of S&P 500 (.SPX) has dropped more than 20% from its record high earlier in January, and the stock market might plummet further to 15% to 20%.

That’s what Mike Novogratz, CEO of top crypto investment firm Galaxy Digital, told CNBC Wednesday (June 15), referring to the 1998 collapse of a large and highly leveraged hedge fund that sent shockwaves so large through the economy that the U.S. government was forced to intervene and broker a $3.6 billion bailout.

Our Editorial Team begs to ask the question, “Aside from making mediocre investment managers become multi-millionaires and billionaires, along with similar exponential gains in net worth for tens of hundreds (and upwards of many thousands of “innovators” and “disruptors”), what product or service, or what actual efficiency has been created for any industry that would justify the outsized gains in net worth afforded to a relatively few?” Contact Us to provide a rebuttal.