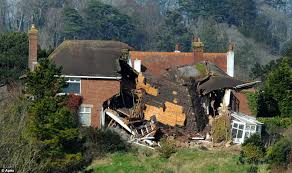 MarketsMuse blog update profiles speculation surrounding SPDR S&P Homebuilders exchange-traded fund. This ETF reach an eight-year high in February but since then has fallen dramatically. Now investors are taking notice and are trying to make a quick exit. This MarketsMuse blog update is courtesy of Callie Bost and Jennifer Kaplan of Bloomberg Business and their article, “Investors In This Homebuilder ETF Are Heading for the Exits“, with an excerpt below.

Investors in homebuilding shares are heading for the door.

Speculators in the SPDR S&P Homebuilders exchange-traded fund have pulled a record amount of cash in April, abandoning the ETF known by its ticker XHB after it reached an eight-year high in February. The fund has retreated 4.8 percent since then.

Traders are doubting equity gains have room for improvement as mixed economic reports muddy the outlook for further growth in the industry. The Federal Reserve is moving closer to raising interest rates, adding to concerns just as homebuilders enter the busiest time of the year.

“Housing stocks are in an interesting position right now,” James Gaul, a portfolio manager at Boston Advisors LLC, which oversees $3 billion, said by phone. “We’re in a bit of a logjam for multiple factors. Until this logjam breaks, it’s going to be hard for national homebuilders to have sustained outperformance.”

At a micro level in the US, all one has to do is look at the iShares U.S. Home Construction ETF (ITB) and SPDR S&P
Homebuilders ETF (XHB) to see the new found interest in the return of the Housing recovery call come early next
year.

The Bloomberg Chart of the Day illustrates that between Nov 15th  and January 31st the S&P 500 Homebuilding Index has come out ahead of the SP500 every year since 2005, and led last year by ~17%. The Raymond James analyst who is the source of this observation said this “…might be the most powerful and consistent seasonal trading phenomenon we’ve witnessed among any industry group.”

U.S. equities and other riskier assets are in rally mode in the first trading session of 2013 after lawmakers finally got around to agr

eeing on legislation that steered the U.S. away from the dreaded fiscal cliff. News that a deal was in the works ignited a rally on Monday while news that the cliff will be dodged has done the same today as the Dow Jones Industrial Average is up about 230 points at this writing while the Nasdaq Composite is sitting on a gain of 2.3 percent.

The tenor of Wednesday’s U.S. trading session is clearly risk on, so much so that before 10:30 AM Eastern time, the overall value of equities and ETFs traded was $73 billion, according to data provided by ETF execution firm WallachBeth. New York-based WallachBeth noted that only trading day in all of 2012 – December options expiration – saw equity value traded exceed $70 billion in the first hour of trading.

In a note to clients, WallachBeth Director of ETF Execution Services Chris Hempstead highlighted intense buying activity “on the ask” in several marquee broad market ETFs. Buying on the ask could be described as “panic buying” to some extent as traders that are willing to buy on the ask price being shown are indicating they are willing to pay up to acquire shares of a particular stock or ETF. The more times the ask price is hit, the more intense a rally becomes.

Read the full story at Benzinga.com

Most ETF names appear to leave little to the imagination. They seem to describe what the fund is all about.

But beware: Sometimes you can’t judge an ETF by its cover.

In many cases, the ETFs are simply aping the names of the indexes they track, so the issue is more one of index composition than duplicitous marketing. But “a misleading name is a misleading name,” says Robert Goldsborough, an ETF analyst with investment researcher Morningstar Inc. And “the first thing anyone sees about an ETF is the name.”

ETF sponsor State Street Global Advisors, a unit of State Street Corp., recently noted in an online checklist designed to help investors analyze ETFs that “many ETFs belie their name.” Thus, “it’s necessary to look beyond the fund’s name or the index it tracks” to analyze the underlying holdings.

Some questionable names are found in State Street’s own lineup, researchers say. IndexUniverse points to SPDR S&P Emerging Middle East & Africa, GAF -1.89% an $88 million ETF that recently had 91% of its assets in South Africa, 4% in Morocco and—for its Middle East exposure—5% in Egypt. Egypt is the only Middle East country that Standard & Poor’s classifies as an “emerging” economy.

Mr. Goldsborough takes issue with State Street’s $2.2 billion SPDR S&P Homebuilders XHB +0.15% . It recently had 74% of assets in companies that are related to but not directly engaged in home building, such as top holdings Whirlpool Corp. and Lowe’s Cos.