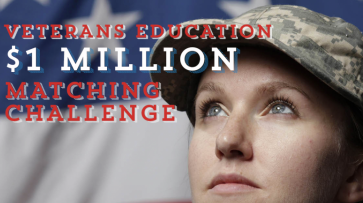 May 12-Stamford, CT–Mischler Financial Group (“MFG”), the financial industry’s oldest minority investment bank and institutional brokerage owned and operated by Service-Disabled Veterans, announced today that in recognition of the upcoming Memorial Day celebration, the firm has pledged a percentage of its entire May profits to Veterans Education Challenge, (VetEdChallenge) a donation-based crowdfund campaign. The philanthropic initiative is dedicated to providing need-based college scholarships to ex-military students pursuing higher education so they can get better access to a broad range of career development opportunities.

Veterans Education Challenge was established in November 2015 by investment management industry veteran Bruce Richards and his wife Avis. Mr. Richards is personally matching the first $1million in donations made to the VetEdChallenge campaign via crowdfund platform “Crowdrise.” He  is co-founder, CEO and managing partner of Marathon Asset Management, the $12.5 billion investment firm specializing in global credit and fixed income markets.

“This Memorial Day Month we’ve embraced a more contemporary approach to paying it forward via the VetEdChallenge program”, said Mischler Financial Group CEO Dean Chamberlain, a graduate of the U.S. Military Academy at West Point who himself earned his MBA via a work-scholarship program at Northwestern University’s Kellogg School of Management. “Our annual, entire month of May pledge in honor of Memorial Day, as well as our annual Veteran’s Day Month pledge has typically focused on traditional, best-in-class philanthropies and we believe the VetEdCballenge is an ideal vehicle to directly impact the future of returning veterans, as higher education can provide a material lift in the course of pursuing opportunities.”

Added Chamberlain, “Because we are always mentoring returning veterans, we know first-hand about the challenges these men and women face as they assimilate back into the mainstream and find themselves working multiple jobs to put aside funds for educational degrees beyond their pre-military academic background. We’re proud to partner with Bruce Richards and be affiliated with his truly thought-leading program. We encourage our institutional clients to help us support this initiative via our trading desk(s) and/or directly via the Veterans Education Challenge crowdfund program.“

Other philanthropic organizations that Mischler Financial Group supports are displayed on the firm’s website via this link.

(RaiseMoney.com) For those Wall Street sharks and finance industry wonks who haven’t yet received the memo about crowdfunding, you might want to dial in to hedge fund industry icon Bruce Richards, Co-Founder and CEO of Marathon Asset Management, the $12.5 billion investment firm that specializes in global credit markets. Richards, whose pedigree includes 15 years in senior trading desk roles for top Wall Street banks before migrating to the world of hedge fund management in 1998, is not only at the helm of one of the investment industry’s most successful and most philanthropic fund managers, he’s just promised to personally match the first $1million raised on crowdfund site Crowdrise for “Veterans Education Challenge”; a campaign dedicated exclusively to funding college scholarships for US military veterans.

The fund raising campaign, announced this past week in conjunction with the celebration of Veterans Day 2015, seeks to raise at least $1mil within the next 12 months, according to the campaign information at crowdfund platform Crowdrise, one of the industry’s leading charitable donation portals co-founded in 2010 by film industry icon and social activist Edward Norton. The goal for the Veterans Education Challenge is to provide scholarship funding for any veterans at 4-year accredited starting the coming school year. This $1 million matching contribution will remain in place until November 11, 2016, next year’s Veterans Day.

In a special note sent to recipients of Richards’ email distribution list, one that typically provides Marathon clients with the firm’s widely-sought insight to global credit markets, Richards provided a starkly compelling investment thesis as to the importance of supporting advanced education for US military members and the need to insure their successful transition into private sector roles in ways the US Government often falls short in providing. In addition to pointing investment firm clients and friends to the Veterans Education Challenge Crowdrise page, Richards encouraged his followers to help advance awareness of the campaign’s FaceBook page and to enlist their following the Twitter account for VetEdChallenge via @VetEdChallenge.

One such recipient of Richards’ outreach included Dean Chamberlain, the Chief Executive of Mischler Financial Group, the securities industry’s oldest investment bank owned and operated by Service-Disabled Veterans and a firm widely-known for underwriting philanthropic causes that benefit military veterans and their families. Stated Chamberlain, “I’ve known Bruce for nearly twenty five years and I commend his philanthropic leadership. I wholeheartedly endorse and have already made my contribution to the VetEdChallenge crowdfund campaign and I will encourage others to follow suit.”

Richards, along with his wife Avis, an award-winning documentary film producer and director and the founder of Birds Nest Foundation, are considered to be one of New York’s top society couples. They are widely-credited by hedge fund peers for their philanthropic thought-leadership. Marathon Asset Management, whose two other leaders include co-founder Louis Hanover and Andrew Rabinowitz, Marathon’s COO is repeatedly lauded for the firm’s culture of supporting critical philanthropic missions that benefit health and welfare social causes.