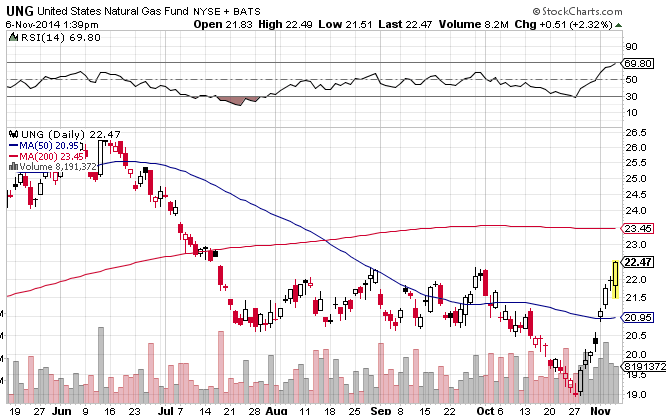 After natural gas futures dipped below $3 for the first time in two years, the commodity and related exchange traded funds are warming up on cold weather next week, but any gains may be brief as temperatures could remain above normal for the rest of the month.

Natural gas futures were heating up from a 27-month low on speculation that a cold snap could stoke demand for  heating fuel next week. According to Commodity Weather Group, “a sizable chunk of arctic air” will cover the Midwest, South and East next week, reports Naureen S. Malik for Bloomberg.

However, while temperatures will drop next week, the weather will likely warm up and continue to weigh on natural gas prices after next week.

While the cold outbreak “is occurring on the anniversary of last year’s polar vortex big event, we do not expect it to reach those levels,” Matt Rogers, president of Commodity Weather, said in a note. “The other big story is the warmer pattern shift for the 11-15 day,” raising temperatures up to seasonal norms across most of the lower 48 states from January 12 to 16.

“We don’t look for this rally to carry above the $3 mark in today’s session despite some possible cold updates to the temperature views,” energy-advisory firm Ritterbusch & Associates said, the Wall Street Journal reports. “Production has been running at a near-record clip.”