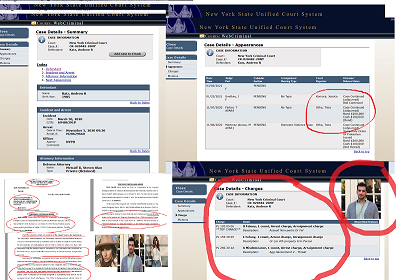 Andrew Katz aka Ross Katz aka Stark Katz, the co-founder of so-called digital asset infrastructure and crypto-currency trading firm Seaquake.io, who along with his partner Matthew J. Krueger of San Francisco are facing investor fraud charges, is now slated to appear in New York Criminal Court April 30 to answer one count of felony assault, one count of grand larceny and one count of aggravated harassment. Katz, whose bail was set at $200,000 had him posting $100,000 in cash, which sources believe to have emanated from funds that Katz and his partner Matthew J. Krueger of San Francisco hoodwinked from a Florida-based family office 18 months ago.

Reward Offered For Information Leading to Apprehension of Founder of so-called “crypto trading and digital asset infrastructure firm”. DO NOT APPROACH SUSPECT: CONTACT NYPD AT 1-800-577-TIPS, OR SUBMIT TIP TO CRIME STOPPERS WEBSITE VIA THIS LINK

The case document is via New York Court System Case CR-02020482-20NY, The victim of the assault is Katz’s now-estranged wife, Selen Katz, a Turkish immigrant who appears to make her career as an Instagram fashion model.

Defendant Katz, who apparently still promotes himself on the firm’s website as co-founder of the so-called digital asset infrastructure company “Seaquake.io” was arrested this past November in New York and now faces 2nd Degree Felony Assault Charges (a class D felony), one count of Grand Larceny ( an E Felony) and one charge of aggravated harassment. If Katz is found guilty or if decides to plead guilty and save the court system the aggravation of having to deal with him, he could be sentenced to a minimum of 2 years in prison.

Katz and Krueger, who have been labeled “the Crypto Kleptos” and The Seaquake Slimeboys” by several people interviewed, are also said to be facing a pending list of other criminal matters, including SBA PPP bank loan fraud. Public records indicate that Mssrs. Katz and Krueger applied for a PPP loan for Seaquake OPS LLC, a Wyoming entity that Seaquake corporate presentations have identified as one of several Seaquake companies. Seaquake OPS LLC did receive a Paycheck Protection Loan of $22,813 through Wells Fargo Bank, National Association, in May, 2020.

Whether Katz or Krueger (or jointly) prepared the loan application when listing employees, Katz’s estranged wife was identified as the company’s Creative Director (whose employment with Seaquake, according to her LinkedIn profile, started in April of 2020. Informed sources have since indicated that Ms. Katz had no recollection of ever having created a LinkedIn account, and has stated she was never an employee of any Seaquake entity. According to police records in Los Angeles and New York, the current assault charge is the latest in a series of at least five prior domestic abuse arrests for Katz.

Manhattan District Attorney’s office would not provide details as to Katz’s current place of residence, yet he is suspected of squirming through an assortment of Airbnb rentals in Southern California while awaiting his April 30 court appearance, as well as New York City. In various documents, Katz also lists residences in Arvada Colorado (belonging to his parents Ken and Alyson Mahl Katz), and he lists addresses in California and Florida in various bank account documents obtained by court order. According to public databases, Katz has prior assault charges, along with charges of harassment, breaking and entering, and stalking throughout the past several years.

In the Florida securities and investor fraud case, in which defendants Katz and Krueger are charged with defrauding a Family Office it’s alleged that the Seaquake Slimeboys (mis) represented they were operating a start-up business and told investors that their several hundred thousand dollar investment in August 2019 “was for balance-sheet purposes only and to show pending venture investors the company did have other investors and assets on the balance sheet”. Communications sent by Katz to the investors indicated a small portion of the capital would be deployed to a proprietary “high-frequency trading” application for crypto currencies.

Alas, there were no pending VC investors, and there was no actual trading application. Katz and Krueger moved the investor funds from one bank to another, and then to a Coinbase account, and thereafter to crypto exchange Binance. It is easy to suspect that Katz and Krueger (a former PayPal employee fluent in cryptocurrency) have been enjoying the 6-fold increase in the price of bitcoin since the initial investor fraud took place.