Courtesy of a Trump White House that has more leaks than a rusty old pipe, sources “not authorized to speak on the record” have said that members of the Trump administration are working to strike a ‘really great deal’ to open full trade with the government of Cuba. The Trump Caveat? Only if President Raul Castro agrees to make good on several billion dollars of claims relating to properties that were “blatantly stolen” from US investors by the Cuban government in 1959 when Fidel Castro’s revolutionary forces took control of the Batista-led regime.

Despite the limited progress made by the Obama administration to relieve sanctions and work towards a full recognition of Cuba, recently-elected President Trump has put together a crisp outline (comprised of three paragraphs on a single page) that will “make Cuba great again” via public-private partnerships sponsored by the US State Department and the real estate development arm of the Trump Organization. White House officials claim there would be no conflict of interest were Trump Organization to participate in the envisioned program, as the public-private scheme would be dependent on a RFP process that would require the lowest bidders to be awarded contracts to build infrastructure, hotels and apartment buildings throughout Cuba. 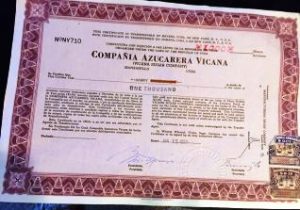 According to a transcript of internal White House discussions, one close Trump advisor stated, “ Our new mantra is going to be Cuba libre! Once the Cuban government addresses how they will make good on claims that the US Government has acquired from US shareholders in companies such as Vicana Sugar Company, which owned more than 26,000 acres of sugar land, 35,000 acres of virgin land and 48 miles of railway before it was stolen by Fidel Castro, we’ll be able to transform Cuba into being a really great place.” Vicana’s real estate assets at current value are estimated to be as much as $500 million. When shares in the company last traded (in 1959), the company’s value was approximately $40 million.

Noted antique bond and stock certificate dealer and collector Bob Kerstein, the founder of Scripholy.com, “There has certainly been a uptick in the prices of out-dated and collectible-value only Cuban debt and share certificates since the easing of relations, including interest in Vicana Sugar stock certificates. That said, whatever Trump people might be thinking is something I am not privy to.” END_OF_DOCUMENT_TOKEN_TO_BE_REPLACED