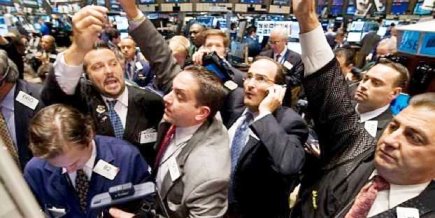 For exchange-based specialists, prop floor traders and upstairs sell-side market-makers, the notion of buy-side traders putting on the hat of risk-taking market-making is a head scratcher. Sure, there’s a cadre of hedge fund wonks who have interned on a sell-side trading desk, then moved up to Greenwich to grab a slot at one of the many firms run by former trading desk heads who now think they can displace the traditional liquidity providers and do a better job of making markets than their counterparts across the aisle. You know who they are; the ones who get a charge out of bashing their sell-side sales/trader with comments like “Listen, if you can’t fill me right now, I’LL make a two-sided market away from you and prove to you what an idiot you are!”

While sell-side folks scoff at that kind of blasphemy, given the more than two decade process in which electronification has upended equities market structure (and now doing the same to FX, Commodities and UST markets), it shouldn’t surprise anyone that there is growing movement in which buy-side equities traders are plotting to take the model of disintermediation one step further and conjuring up business plans that would have them providing liquidity to the market (via making two-sided markets), instead of their historic role of having a one-sided axe in a particular name.

With that entree, we segue into a fresh-off-the-press column from Shanny Basar at Markets Media “Buy-side Looks to Fill Market-Making Vacuum”….

Nearly half of hedge funds said they would evaluate being market makers in certain securities as banks pull back from some markets, according to a new survey from State Street.

In a report “Let’s Talk Liquidity: Opportunities in a New Market Environment”, State Street surveyed institutional investors on whether market liquidity has deteriorated. Banks have shrunk their balance sheets in response to the increase in capital requirement from regulations such as Basel III, Dodd-Frank and Solvency II and pulled back from some activities. The study had 300 global respondents which included 150 asset owners and 150 asset managers, including 50 hedge funds.

John Bolton, global head of thought leadership at State Street, said in a media briefing today that 30% of respondents said the liquidity of their institution’s portfolio had decreased over the past three years, while 28% said it was unchanged. Nearly half, 48%, believe decreased market liquidity is a structural issue and not likely to change.

As a result 49% of respondents believe the role of non-bank institutions as providers of market liquidity will increase, with large pension funds and buy-side firms making prices.

“43% of hedge funds would evaluate being market makers in certain securities,” added Bolton.

Alex Lawson, head of securities finance, Europe, Middle East and Africa at State Street said at the briefing that in addition to new entrants in market making, the decrease in liquidity will lead to an increase in electronic trading and peer-to-peer connectivity so participants can directly meet their financing needs without the need for intermediaries.

Lawson added: “Regulations have changed the capacity in the market and there are new entrants who have capacity such as Canadian banks and non-banks.”

For example, State Street launched an enhanced custody offering in the US seven years ago and in EMEA three years ago as an alternative to traditional prime brokerage financing as the custodian generates large amounts of internal cash. Clients can borrow and finance securities directly with State Street within a segregated custody account.

Lawson continued that the International Securities Lending conference in June included a panel in which two asset owners, including a sovereign wealth fund, and two hedge funds discussed how they were changing their use of the securities lending market and becoming less reliant on banks.

In order to access more liquidity 48% of institutions said they will increase their use of electronic trading platforms and nearly six in 10 believe the electrification of over-the-counter markets will accelerate over the next three years.

“The industry needs to add capacity so we believe in allowing clients to connect in many ways as possible,” added Lawson. “That could include agency lending, across an electronic platform or through facilitating direct relationships.”

The International Securities Lending Association said in its latest half-yearly market report that there have been significant changes in how institutional investors have been using repo and securities lending markets in the past two years.

Take-away from (2) news articles today profiling proliferation of algorithmic trading strategies: The buyside “gets it”, but they don’t want it..

Excerpt from WSJ’s Bradley Hope article “Buyside Traders Move Upstairs”: Some of the world’s biggest investors are changing the way they trade in U.S. markets in response to what they say are rising risks for institutions of their size.

The strategies include conducting more “upstairs trades,” in which deals are executed among big institutions, bypassing the broader market, as well as other sophisticated order-routing techniques designed to avoid pitfalls that have become increasingly apparent to investment managers.

Investors say such measures are increasingly necessary because the proliferation of algorithmic trading and other structural issues, including the fragmentation of the market, are hurting their ability to get the best prices and execute large trades quickly.

With algorithmic trading firmly entrenched in the electronic equity landscape, buy-side traders on an eternal quest for alpha preservation are moving beyond algo selection to algo optimization, which entails monitoring and calibrating as the trade is going down.

“The real objective is to get best execution, which often requires not only picking an algorithm but managing the parameters of that algorithm subject to market conditions,” said Michael Earlywine, head trader, North America at $1.2 billion asset manager Ecofin.

One of the more compelling critiques re: above noted topic is courtesy of industry veteran and electronic trading guru Thomas Quigley, Managing Director/Electronic Trading Group for agency boutique WallachBeth Capital,  “The take-away from both articles is a message that we caveat whenever institutional firms reach out to us for guidance; however commoditized electronic trading approaches have become, and however easy it may seem to choose and implement algo-based strategies, the need for consultative and agnostic guidance has never been more relevant.”

Both above-noted news articles can be accessed by clicking on the logo links adjacent to the excerpt.