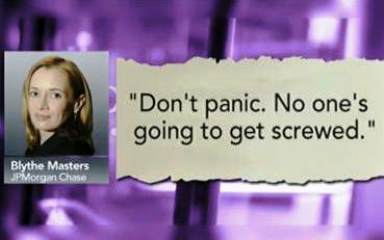 Blythe Masters, the former grand dame of derivatives for investment bank JP Morgan, who after a less-than-glorious exit from her senior role overseeing credit derivatives for House of Morgan and who reinvented herself as a blockchain babe and leads digital ledger startup Digital Asset Holdings, has proven that every cute cat has nine lives. In a press release issued this week, Depository Trust & Clearing Corp. aka DTTC, the industry-owned utility that processes transactions across the multi-$trillion repurchase agreement and government securities markets has entered into an agreement with the startup to test their blockchain application for use within the $2.6tril repo market sleeve so that lenders and borrowers across the often illiquid repo market can have a more efficient tool to track securities and cash flowing between counterparties.

Digital Asset Holdings, for which Masters is Chief Executive Officer, is considered one of the top 3 fintech companies focused on leveraging digital ledger technologies, the basic foundation of the cryptocurrency bitcoin. R3 Blockchain Group, whose investors include a consortium of 42 investment banks and financial service firms and is led by former inter-dealer broker David Rutter, along with Symbiont, the creator of Smart Securities and sponsored by merchant bank SenaHill Partners, are considered to be the other leading players in the space seeking to ‘institutionalize’ the value proposition of the technology that powers bitcoin.

(WSJ)-Depository Trust & Clearing Corp., a firm at the center of Wall Street’s trading infrastructure, is about to give the technology behind bitcoin a big test: seeing whether it can be used to bolster the $2.6 trillion repo market.

DTCC said in a statement Tuesday that it will begin testing an application of blockchain, the digital ledger originally used to track ownership and payments of the cryptocurrency bitcoin, to help smooth over problems in the crucial but increasingly illiquid corner of short-term lending markets known as repurchase agreements, or “repos.”

Repos play a critical role in the financial system by keeping cash and securities circulating among hedge funds, investment banks and other financial firms.

DTCC, an industry-owned utility that helps settle trades in the repo market and elsewhere, wants to apply blockchain technology to the market, so that lenders and borrowers can keep track of securities and cash flowing between firms in real time.