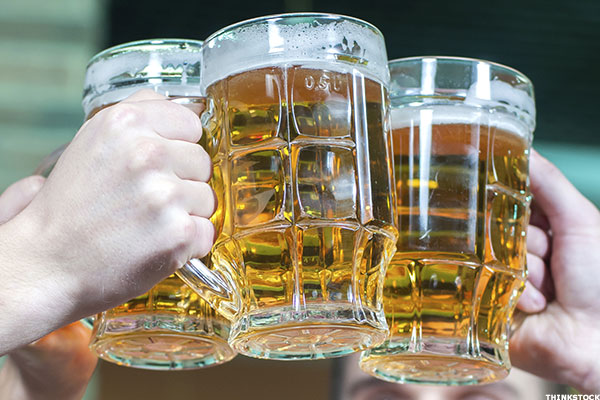 MarketMuse update is courtesy of Bloomberg’s Justin Fox. It is very difficult to invest stocks for long term, humans’ interests are always changing and that affects the stock market. Bloomberg’s Justin Fox suggests that people should invest in human behaviors such as the tobacco and alcohol industries, such as the tobacco sector big name, Philip Morris International Inc., PM or popular alcohol ETF,  Constellation Brands Inc., STZ. He explains that unless these products are banned, humans will always have an interest.

It would be really cool to know which industries are going to thrive and grow and create jobs in the future. It’s also really hard to figure that out ahead of time. If you’re just interested in which industries will deliver the best stock-market returns, though, history seems to point to an easy shortcut — invest in companies that sell addictive stuff.

I learned this dubious lesson by reading, in quick succession, two big new reports: the Brookings Institution’s analysis of the 50 “Advanced Industries” that are supposed to drive job and income growth in the U.S., and Credit Suisse’s annual “Global Investment Returns Yearbook.” The Brookings report tries to look into the future by measuring investment in technological progress by industry — and although most of the 50 advanced industries it identifies are what you would expect, there are some surprises. In the 2015 Credit Suisse yearbook, meanwhile, Elroy Dimson, Paul Marsh and Mike Staunton of London Business School examine 115 years of stock-market returns by industry, and while they document a lot of technological upheaval, the two biggest winners for investors turn out to be decidedly low tech.

An advanced industry, by Brookings’ accounting, is one “in which R&D spending per worker reaches the top 20 percent of all industries and the share of workers with significant STEM knowledge exceeds the national average.” (STEM = science, technology, engineering and math. And R&D = research and development. But you probably knew that.) There’s lots of research showing that technological change drives economic growth, and R&D spending and STEM knowledge are supposed to be proxies for future technological change.

I don’t know of any obviously better proxies, but the results show the difficulty of any such accounting. The list of the very biggest R&D spenders isn’t particularly surprising: 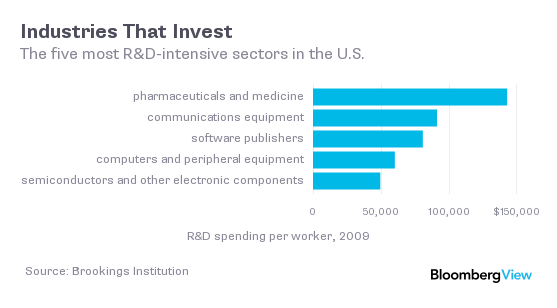 Dig deeper into the advanced industries list, though, and you soon come across industries that don’t seem all that advanced: railroad rolling stock, foundries, petroleum and coal products, metal-ore mining. Are these secret hotbeds of technological change that should command more attention? Probably not. One old-school industry, motor-vehicle manufacturing, does spend a ton on R&D ($48,461 per worker), but those others made the list mainly because there just aren’t that many industries in the U.S. that invest in R&D at all. To get to 50, you have to include a bunch of industries with per-worker spending of less than $5,000 a year. (No. 50, in case you’re wondering, is wireless-telecommunication carriers — which spent just $455 per worker in 2009.)

This isn’t necessarily a problem for the U.S. economy. One thing you’ll notice if you spend any time with the North American Industry Classification System is that it’s backward-looking. Older parts of the economy are divided into lots and lots of industries; newer ones aren’t. So you get railroad rolling-stock manufacturing, which employed 25,200 people in 2013 and generated $3.6 billion in output, counted as an industry on the same level as computer-systems design, which employed 1.7 million people and generated $246 billion.

Yet it’s these newer industries that generate the growth — at least, they have over the past 115 years. In 1900, according to the Credit Suisse yearbook, railroads accounted for 63 percent of stock-market value in the U.S. Now they’re less than 1 percent, and 62 percent of U.S. stock-market value is in industries that were small or nonexistent in 1900. The largest industries by market cap now are technology, oil and gas, banking and health care.

We’re all supposed to believe that past performance is no guarantee of future results. But given human nature, it seems reasonable to expect tobacco and alcohol to continue to do well — unless tobacco is completely banned, of course. Picking the next hot industry is a much harder task, yet it is a much more important one.