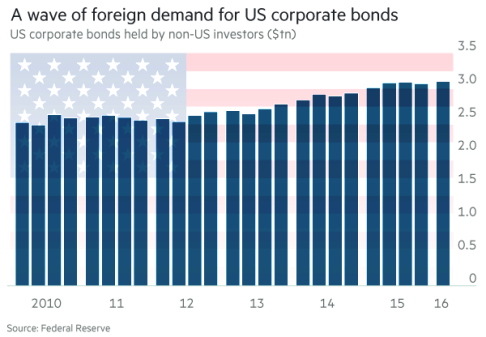 MarketsMuse Fixed Income Curators have been keeping tabs on the seemingly insatiable and outsize demand for yield and in particular, the demand for IG Corporate Bonds aka  investment grade corporate debt. With that, we roll to opening excerpt of Aug 9 notes from “Quigley’s Corner”, the financial industry award-winning commentary produced by Ron Quigley, Head of Fixed Income Syndicate for boutique investment bank/institutional brokerage Mischler Financial Group, the securities industry’s oldest minority broker-dealer owned and operated by Service-Disabled Veterans..

Today things slowed down a bit for the IG dollar DCM but it was still a formidable line-up. We featured 5 IG Corporate Debt issuers that priced 9 tranches between them totaling $7.66b.  The Asian Development Bank priced its expected two-part 3s/10s new issue in the SSA space that totaled $1.3b bringing today’s all-in IG tally to 6 issuers, 11 tranches for $8.96b.

The big deal of the day in the IG Corporate Debt space was Duke Energy Corp. $3.75b 3-part 5s/10s/30s issued to finance a portion of costs in connection with Duke’s acquisition of Piedmont Natural Gas Company Inc.   Last week Duke Energy (NYSE:DUK) announced it mandated Barclays, Credit Suisse, Mizuho, MUFG Securities and UBS as joint leads to arrange investor calls after which a transaction could soon follow.  As has been written in the “QC” pipeline for a while, on Friday, January 22nd, shareholders of Piedmont Natural Gas (A2/A) voted to approve the Company’s acquisition by Duke Energy (A3/BBB+).  66.8% of voting shares supported the acquisition.  In late October 2015, Duke Energy, (A3/BBB+) the nation’s largest utility, announced that it will buy Piedmont Natural Gas (A2/A) for $4.9b in cash.  Both companies are partners in the $5b Atlantic Coast Pipeline.  The purchase adds one million new rate payers to Duke Energy’s customer base.  Congrats to Duke!

Rates on the Rise?…Think Again.

Today the U.S. Treasury held a 3-year notes auction.  It was one of the strongest in years.  Investors or buyers, for that matter, fly into the safety of USTs motivated by fear and desire for safety.  No one flies into 3yr Notes for the 0.85% yield.  You want my money?  Let’s talk about 5-8% and we can discuss it.  So, when I heard the 3yr auction was so wildly successful I pulled up a chair next to my rates guru Mr. Tony Farren to discuss the matter.  Here are the prescient takeaways:

What does it all mean?  Lower-for-longer.  The Fed is not raising rates anytime soon folks.  Taking rate volatility off the table means dive int the stock market readers.  Get back in now.