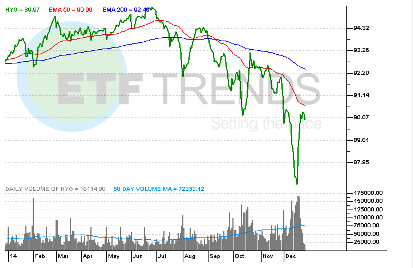 Options hedging against swings in HYG “cost the most since 2010 versus those on an ETF following Treasuries and were at an almost six-year high relative to contracts on a Standard & Poor’s 500 Index fund,” report Inyoung Hwang and Jonathan Morgan for Bloomberg.

HYG is off 3.1% this year, but the ETF’s declines and those of its rivals have worsened in the back half of the year as oil’s slide has gained speed. HYG is off 5.6% over the past six months as the United States Oil Fund (NYSEArca: USO) has plunged nearly 47% over the same period.

The message from the options market regarding HYG is clear: More declines are on the way.

“About 56,000 bearish and bullish options changed hands daily on average in December, compared with an annual mean of less than 23,000 through the end of November,” according to Bloomberg.

As oil prices have tumbled, high-yield corporate bond investors have become skittish due to the rising influence of the energy sector within the U.S. junk bond market. Energy issuers account for 15% of the U.S. high-yield market, up from less than 10% seven years ago. [Oil Will Drag Junk Bond ETFs Down]

Oil and gas issuers account for 13.5% of HYG’s weight, the ETF’s second-largest sector allocation behind a 14.9% weight to consumer services.

Then there is the matter of increased leverage. At the end of the second quarter, U.S. shale producers had a total of $190.2 billion in debt, up from less than $150 billion at the end of 2011, according to Bloomberg data.

For the entire story from ETFtrends.com, please click here.

Mr. Shriber has been involved with financial markets for over a decade and has been writing about ETFs for over seven years. Prior to joining ETF Trends, Mr. Shriber was the chief ETF analyst at Benzinga. His written work has appeared on MarketWatch, Minyanville and Investopedia, among other web sites and major daily newspapers such as the New York Times and Washington Post.