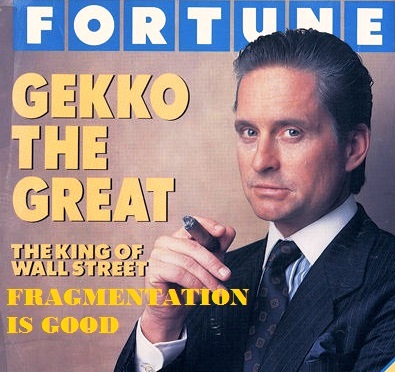 MarketsMuse senior editors have quickly canvassed a broad assortment of “market structure experts” and industry talking heads who have been at the forefront of debating the pros and cons of market electronification, multiple market centers and the underlying issue: “Is Market Fragmentation Good, Bad or Ugly?”

For those who might have just landed on Planet Earth, the debate (which is ongoing via industry outlets such as TabbForum, MarketsMedia, and most others) boils down to whether multiple, competing electronic exchange systems enhance overall market liquidity and make it ‘easier and better’ for institutions and retail investors to execute ‘anywhere/anytime’ via the now nearly two dozen “ECNs”, “Dark Pools” that offer a Chinese menu of rebates, kickbacks and assorted maker-taker fee schemes (e.g. ARCA, BATS etc), or whether someone should try to shove the Genie back into the bottle and revert to the days of yore when the NYSE was the dominant listing and trading center for top company shares, and complemented by a select, handful of regional stock exchanges, most notably, The MidWest Stock Exchange, The American Stock Exchange, The Philadelphia Stock and the Cincinnati Stock Exchange. 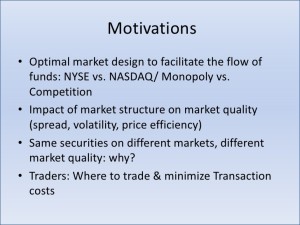 Despite the fact that CNBC talking heads dedicated the entire day’s coverage to the NYSE snafu with rampant speculation as to whether the day’s outage was due to a cyber attack by the Chinese in their effort to distract the world from the dramatic drop in China-listed shares, whether it was a Russia-based malware attack, or perhaps even an ISIS-born cyber-terrorist attack that also impacted United Airlines)–the fact of the matter (one that CNBC seemed oblivious to) is that those who wanted to execute stock trades through their brokers were able to do so without disruption, simply because those brokers routed orders to a drop down menu of exchanges that compete with the NYSE..

Yes, the NYSE lost a day’s worth of fees attached to every order they typically execute on a normal day (not a good day for exchange President Tom Farley)–but more than half of the market structure experts who have continued to campaign against market fragmentation have [temporarily] flip-flopped today and have acknowledged that were it not for multiple competing exchanges, today would have been a real headache for US stock market investors and brokers. No doubt CNBC and others who were fixated on this outage will be able to turn their attention back to what is taking place in Greece, China and other topics that actually do impact the price of global equities.