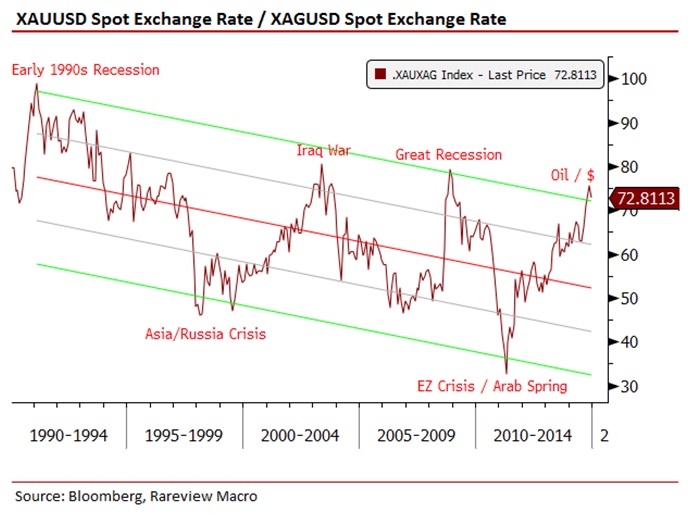 Below excerpt from a.m. edition of Sight Beyond Sight, is courtesy of global macro think tank, Rareview Macro LLC

Below are two illustrations: A “monthly” chart of long Gold versus Silver and a matrix containing our trade construction details.

Note that this is not a short-term “tactical” trade but rather an intermediate term “strategic” trade. As such, it will be managed with greater latitude in terms of risk.

Similar to the 200-day Moving Average (200-DMAVG), we find long-term Linear Regression Channels can be a strong technical indicator.

When long-term ratios, as defined by a “monthly” period, are beyond the 2 standard deviation (2-SD) threshold we believe an opportunity presents itself and the prior trend is ending. In this case, it just so happens that this signal fits our established negative view on Gold and comes at a time when there are major worldwide inflection points in two key assets – Crude Oil & US Dollar.

We recognize that we are nearing the end of the year and our mindset since late November has been not to deploy too much risk in order to safeguard the outperformance in the model portfolio. However, intermediate-term investment themes do not adhere to a Gregorian calendar year-end and sometimes you have to sacrifice these artificial hurdles to embrace what should be a profitable strategic opportunity. This is one of those times.

By the way, as the European Central Bank (ECB) considers full-blown QE possibly commencing sometime in 2015we were pleased to see President Mario Draghi at his post-policy meeting press conference discussing purchasing all assets with the exception of gold. While that is so far from reality it warrants mentioning because the “Gold terrorists” live in a parallel universe to begin with.

We are becoming more sanguine on European equities for a variety of reasons. We will aim to outline this strategy in more detail for you early next week but wanted to alert you in advance in case we were to act on it.

We are watching the spread between the two benchmarks very closely after Europe’s recent 3-5% outperformance. We would like to see that ratio partially retrace first but stop-out near the highs for an entry point. That would be a signal in our view to become more opportunistic in anticipation of a 2015 asset allocation into European equities.

The basic premise is that a number of factors are aligning to boost Europe: valuations, earnings, positioning, technicals, monetary policy, and fiscal support.