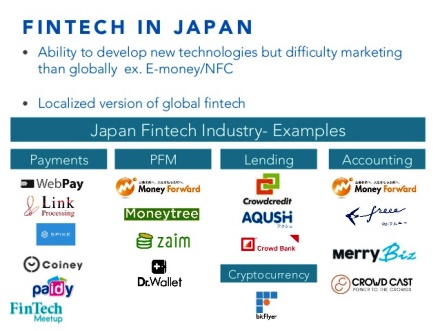 The FinTech Sector is red hot now in Japan as Land of Rising Sun Banks now looking to pour hundreds of millions of dollars into fintech start-ups after the abolition of a law that prevented them from owning more than 5 per cent of a technology company.

(FT) 25 September The changes are part of a national effort to push into the fintech sector and pursue investments in financial technology startups, highlighting fears in Tokyo that Silicon Valley could decimate Japan’s banking sector as it did the country’s mobile phone industry.

“Japanese institutions are concerned that a Google Bank or Facebook Bank will conquer Japan,” said Naoyuki Iwashita, head of the FinTech Centre at the Bank of Japan.

It means that Japan could become a big new source of funding for start-ups, especially in Asia, that are experimenting with technologies such as blockchain or artificial intelligence.

Yasuhiro Sato, chief executive of Mizuho, told a conference in Tokyo last week that Japanese banks had been constrained by regulators wanting to preserve old, but tried-and-tested, IT systems.

If you’ve got a hot tip, a bright and topical story idea relating to fintech, global macro, ETFs or fixed income, or if you’d like to get visibility for your firm through MarketsMuse via subliminal content marketing, advertorial, blatant shout-out, spotlight article, etc., please reach out via this link

“I think [regulators], especially the Japanese Financial Services Agency, are now changing their thoughts on that,” he told the FinSum conference, organised by the FSA and Nikkei, owner of the Financial Times.

The change in the law means banks can ignore a 5 per cent limit on stakes in non-financial companies if their purpose is to apply information technology to finance.

The FSA is considering a further legal change that would make it easier for fintech companies to engage in regulated financial activities. “In order to obtain more technological advances from outside participants,” said Mr Sato. “That’s the reason why the banking law will now quite likely be changing.”

Mizuho established a presence in Silicon Valley three years ago and this year added an innovation-focused office in New York. Mr Sato said the rule changes would accelerate that. “We have created a specific team, which is the innovation product team, to make significant investment in venture companies. We are sending many many persons to the US.”

Other global banks have opened outposts in California. BBVA, the Spanish bank, is one of the most aggressive, acquiring Simple, an Oregon-based digital lender in 2014, and investing in Prosper, the San Francisco-based peer-to-peer platform. It also set up a venture capital company, Propel Ventures, to pursue investments in other start-ups. SenaHill is a leading merchant bank boutique specializing in fintech initiatives and focused on fast growth companies that are producing revenue and/or startups that have at least one year of business operating metrics.