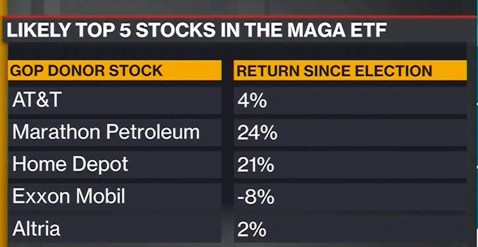 We can’t make this sh*t up..Just when MarketsMuse curators thought we’d seen and heard it all when it comes to new-fangled ETF products, along comes an exchange-traded fund construct that has managed to surprise even our own high-seasoned in-house cynics. The proposed ETF is one with an investment style (or call it a scheme) that is dedicated to “assembling shares in public companies that support the US Republican Party” aka G.O.P. The fund sponsor, Point Bridge Capital of Forth Worth, TX , has dubbed the proposed ETF,  “The Point Bridge GOP Stock Tracker.” Point Bridge execs hope to list the new politically-flavored ETF on the BATS BZX Exchange with the ticker symbol “MAGA” an acronym that stands for the slogan that current US president Donald Trump stole from former President Ronald Reagan i.e. “Make America Great Again.”

According the Point Bridge Capital website, firm founder Hal Lambert has over 20 years of investment experience and leads investment advisory for the firm. Prior to launching Point Bridge Capital, Lambert was a Director at Credit Suisse advising and managing client assets in excess of $1 billion. He advises pension plans, family offices, foundations, and ultra-high-net-worth individuals.

Before joining Credit Suisse, Hal was a Portfolio Manager at J.P. Morgan, where he headed discretionary portfolio management for the Southwest Region, advising all regional clients – individuals, foundations and endowments – on overall investment strategy. He managed a U.S. Core Equity strategy with total assets under management of over $1 billion, as well as a long/short strategy. After JP Morgan was acquired by Chase, Hal helped open the Denver office and headed discretionary portfolio management for the Mountain Region. .

According to a Wednesday filing last week with the US Securities and Exchange Commission, the Point Bridge GOP Stock Tracker ETF will specifically track the performance of an index of stocks meeting the following criteria:

“Companies whose employees and political action committees (PACs) are highly supportive of Republican candidates for election to the United States Congress, the Vice Presidency, or the Presidency and party-affiliated federal committees or groups that are subject to federal campaign contribution limits.”

To select its constituents, the fund’s underlying index starts with an initial universe of S&P 500 companies and then whittles it down based on factors like campaign donations made during recent elections. The fund’s sponsors did not indicate whether the fund will also be short-selling public companies that have been on the receiving end of so-called President Trump’s twitter diatribes. MarketsMuse attempted to contact Point Bridge senior executive Hal Lambert to pose that very question, but unlike Mr. Trump, a Point Bridge spokesperson (or someone who says they are the spokesperson, but refused to provide their name) stated, “We are in a quiet period and any comment would violate the SEC rules.” Maybe they should reach out to the Tweeter-in-Chief and request amnesty from SEC rules??

While this marks the first ETF to specifically track partisan interests, there are plenty of other funds embodying Trump’s political spirit. They include the Global X US Infrastructure Development, which started trading on March 18, and the WisdomTree Global ex-Mexico Equity Fund, which hit the market on February 10.

The Point Bridge GOP ETF has an expected inception date of September 7, according to Bloomberg data.