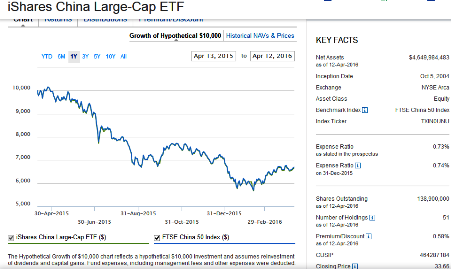 For those following global macro think tank Rareview Macro’s “Sight Beyond Sight”, you already know that the firm’s chief strategist Neil Azous is on a roll and the firm’s model portfolio is outpacing many who have an ax in global macro style investing. Today’s edition of the firm’s commentary caught the attention of MarketsMuse curators in our ETF and Strike Price departments when noticing a Gut Trade view re the top China ETF: FXI. Below is the extract from today’s edition of Sight Beyond Sight and reproduced with permission..

Usually, we do our best to provide solid supporting evidence and some underlying insight for every trade we put forward in these pages.

It does not happen very often, at least for us, but sometimes this business is also about a gut feeling, instead of cold analysis, and nothing more. When it strikes, we act.Yesterday, we said that Monday was a top 3 performing day of the year in the model portfolio and that we are going to take that outsized performance for a spin and ramp things up a bit more directionally than normal. So you will see a subtle change in our tone and some of the things we do going forward. It will be a bit more aggressive.

Well, yesterday turned out to be even better than Monday and on account of again closing at a new high watermark for 2016, we feel it’s time to shift into a higher gear.

As we were walking out of a meeting yesterday afternoon we had a “gut feel” that the unwind related to all the voodoo we wrote in yesterday’s edition on a “mini-inflation scare” was going to accelerate and we were not big enough in the positions we had on.

On March 30th, we added a long FXI position to our watch list.

Last night, the Hang Seng Index showed the largest positive risk-adjusted return across ALL regions and assets.For the avoidance of doubt, the FXI and the Hang Seng, in correlation terms, are virtually one and the same thing. While mainland China indices move and regularly make our risk -adjusted return monitor it is very rare to see the Hang Seng on that screen. We are well aware the data has stabilized in China, their political communication strategy is now more effective than last summer, and they have done a masterful job weakening their currency basket while holding steady vs. the US dollar. But what was missing was some action in the stock market following all that , especially the non-mainland such as Hong Kong.

Our interest is now piqued.

The structure we initially added to our watch list was to go long on the FXI August 38 call options. One structure we like even more is as follows:

After last night’s move in Asia, we doubt we will get the chance today as China is bid up.

At yesterday’s closing prices you could add this risk-reversal for even money on account of the puts trading 12 implied volatility points rich to the calls. Selling that expensive skew and knowing that the low in February was $28.44 (vs. the 28 put strike) is a better proxy for getting long than just buying the spot FXI outright. Besides, if we are wrong, and China implodes, we have massive convexity in our book overlays via being long on SPX puts and S. Korea credit default swaps (CDS).

We will see if we get the chance to put this on today for even money, or at least a similar structure. Otherwise, we may have to chase the bid and pay up if we want to participate. It is not going to help our entry point that JPMorgan raised MSCI China to overweight, but at least they downgraded Taiwan to neutral, which we are short of their currency.   Real time updates as to this position and all others are posted via our Twitter feed @NeilAzous

Neil Azous is the Founder and Managing Member of Rareview Macro, an advisory firm to some of the world’s most influential investors and the publisher of the daily newsletter Sight Beyond Sight®. Neil has close on two decades of experience across the financial markets, and is recognized as a thought leader in global macro investing. Prior to founding Rareview Macro, Neil was a Managing Director at Navigate Advisors where he specialized in constructing portfolios and advising on risk. His daily commentary was highly regarded by the institutional investing community and his success in delivering a forward-looking viewpoint on global markets helped lay the foundation for Sight Beyond Sight® to be built. On Wall Street, his career included roles at UBS Investment Bank and Donaldson Lufkin & Jenrette, where his responsibilities comprised of trading derivatives, hedging solutions, asset allocation and fundamental securities analysis. He began his career at Goldman Sachs in Fixed Income, after completing both the firm’s Analyst and Associate training programs, widely acknowledged as the pre-eminent and most coveted learning ground for undergraduate and graduate students. Neil completed graduate level coursework for a MS in Real Estate at New York University and received his BA in Business Administration from the University of Washington, where he is a member of the University of Washington Bothell Board of Advisors and was the recipient of the Bothell Business School 2013 Distinguished Undergraduate Alumnus Award. He is active in various charity and community organizations.