You’ll want to click “more” for the full article. For those with short attention spans, Kessler concluded with: “One thing I’ve learned from my bruising time on Wall Street is to never get in the way of a freight train. Stocks with momentum keep momentum as mutual funds and index funds load up. They never seem expensive—until at some point the fundamentals subtly shift for the worse. Momentum works in both directions. Pull up the charts for General Motors, Xerox or Kodak on your iPhone.”

How Much Is Apple Worth?

It touched $600 on Thursday, still cheap if the company can keep up its torrid growth. If.

Apple is a juggernaut. Its stock touched $600 on Thursday, which represents $560 billion in market capitalization. Compare this to Exxon Mobil, with a market cap of $400 billion, IBM’s $240 billion and Wal-Mart’s $210 billion. Can Apple really be worth that much?

The easy answer is that the company is worth whatever the market says it’s worth. Well, yes, the market is right every day—but it is right only for that day. What about tomorrow?

Smart investors look under every rock to estimate what’s going to happen next. And some are breathlessly claiming the stock is cheap and headed for $1,000—a trillion-dollar market cap. Others invoke the Wall Street adage that no tree grows to the sky.

So which is it? I think a better way to get at an answer is to ask: What is Apple? A phone manufacturer? Tablet innovator? Software vendor? Music sales channel? Certainly yes to all of those, but more important, Apple’s devices and software are a platform for others to make money. Wireless operators resell iPhones and make money on voice and data plans. Developers sell interesting apps. Labels, networks and studios sell music, TV shows and movies. While they last, platforms are money machines. Build one and they’ll come and keep buying what you sell until you screw up. IBM, Microsoft, Google, Apple, Facebook all had or have the secret sauce.

Right now, Apple is in a sweet spot. Its iPhones and iPads are driving the company’s 40%-50% annual revenue growth. The stock is cheap if Apple can keep up this torrid pace. Of course, this means $50 billion-$60 billion in additional sales in 2012, on top of the $125 billion last year—no easy feat. 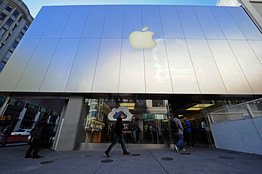 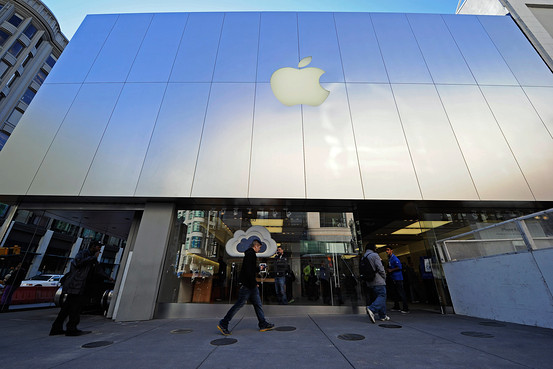 But those bullish on Apple note that iPhones are only starting to penetrate China. The company sold 40 million iPads in 2011—but this is just 11% of the total 350 million PCs, desktops and laptops sold last year.

Moreover, the new iPad 3 uses Apple’s Retina display technology. The iPad’s display, at 2048 x 1536 pixels, is finer than high-definition televisions’ 1920 x 1080 pixels. But an iPad has a diagonal display of only 9.7 inches. Crank that up to a 50-inch diagonal TV and marry it with some form of iTunes to deliver shows and movies, and you upend the entire consumer electronics business.

Last year Apple cleared $33 billion in after-tax profits. It sits on close to $100 billion in cash with no debt. And the stock is selling at around 12 times its $50 earnings estimate for the full year 2012—about the same as the current overall stock market multiple. By that metric Apple is neither cheap nor expensive.

But—and there is always a but—Apple’s stock is expensive if either the growth doesn’t materialize or if its operating margins of 30%-plus don’t hold. In other words, does competition or some technology change hit Apple where it hurts?

Right now, Google gives away its Android operating system to HTC, Samsung and others, giving these cellphone-handset makers a real price advantage over Apple. This is one reason Android is winning in China.

There’s also the problem of patent suits (everybody is suing everybody else right now). A loss in any given patent suit could knock $50-$100 off Apple’s stock and strengthen competitors’ hands. New technology in the form of HTML 5, a computer language that allows Web pages to run as if they are apps, may allow app developers and music companies to bypass Apple’s control of what’s available in its app store and even on iTunes.

Other bearish things: Tablets are booming, but it’s unclear if customers care yet about very high resolution in a 10-inch display. The TV business that Apple may or may not take over is no prize. It’s a painfully low- or no-margin business—just ask Sony.

Want to really worry? Wages are going up in China and all across Asia where Apple devices are assembled, which can cut into the company’s margins. A rise in China’s renminbi currency, which half of our Senate seems to want to legislate, would also hurt Apple’s margins: A cheaper dollar means higher labor and component costs.

One thing I’ve learned from my bruising time on Wall Street is to never get in the way of a freight train. Stocks with momentum keep momentum as mutual funds and index funds load up. They never seem expensive—until at some point the fundamentals subtly shift for the worse. Momentum works in both directions. Pull up the charts for General Motors, Xerox or Kodak on your iPhone.

Mr. Kessler, a former hedge-fund manager, is the author most recently of “Eat People” (Portfolio, 2011).