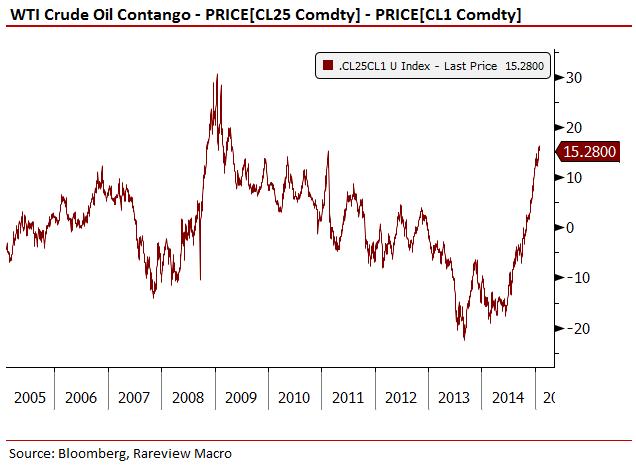 MarketsMuse provides below extracts from Feb 2 edition of Rareview Macro’s Sight Beyond Sight as a courtesy to our readers. The entire edition of today’s SBS newsletter is available via the link below.

No One Prepared for Deflation Risk to Subside

The key question that professional investors are asking today is this. How should they interpret the ~15% bounce off the lows in Crude Oil? Is that durable or will it just get sold?

To start to answer that, take a look at the first chart below. The Saudi riyal is the official currency of Saudi Arabia. The Dollar-Riyal (USD/SAR) currency cross is showing the largest negative risk-adjusted return across regions and assets by a significant margin. In absolute terms, the retracement is the largest 1-day move, up or down, since the sell-off in the “barrel” began last summer.

Given that the riyal is officially pegged to the US Dollar (i.e. fixed at 1 U.S. dollar per 3.75 riyals) and has been trading materially above the fixing level for the last four-months, it should be clear that the most acute response so far to the bounce in crude oil is taking place in Saudi Arabia. Put another way, the price action in the riyal suggests that some change in sentiment with respect to global supply and geopolitics may be underway.

See the second chart below of the generic 25th minus the generic 1st WTI crude oil futures contract.

As you can see, the speed and the degree of the buildup in the negative roll-yield are similar to, if not even swifter, than that seen during the Global Financial Crisis (GFC). The key difference between now and then however, is that the weakness today is supply related as opposed to demand driven.

The second key takeaway is related to the longer-dated futures contract. The basic argument is that when the back end of the futures curve stops going down it means that the new medium-term storage costs have largely been discounted. If you look at the construct of the oil curve, it is easy to make an argument that the backend (i.e. CL25) stopped going down throughout January and the latest oil price weakness, or move higher in the contango, was primarily related to the front-month contract still adjusted to supply issues.

To be clear, we are NOT making the call that the build-up in the contango is now complete. But what we are saying is that taken together the Saudi Arabia currency reaction and the current negative yield mean we will at least respect the idea that crude weakness could pause in the short-term, if not bounce further.

One reason we feel comfortable holding this view is that the probability that inventory at Cushing will build at the same pace (i.e. ~2mm/brl per week) for the next few weeks is low given the surprise gasoline demand in January.

So here is a key question. Knowing that inflation in all G10 countries is now formally below their respective central banks’ mid-point of target ranges, and in some cases it is even below the lower band of those ranges, and in a few it is even in negative territory on the CPI readings, how is the consensus positioning and dogmatic deflation view going to react if the crude oil bounce turns out to be durable and the call for $35/brl in WTI was overly aggressive in retrospect?

While the answer to that question is crucial on so many fronts, the most acute risk factor from an asset class standpoint is in US fixed income. Why? Because that would mean the Federal Reserve would have confirmation that the move lower in crude oil prices was indeed “transitory” and as professionals are forced to walk their deflation views backwards they will also have to re-price the potential risk that interest rates will be raised in the first half of 2015. And that implies a meaningful move in fixed income would be forthcoming.

The strength in crude oil raises another important point but this time related to volatility.

Following the change in policy by the Swiss National Bank and last week’s actions by Denmark’s central bank there is no question that the Saudi/GCC and the Hong Kong dollar pegs are also being discussed as potential targets/victims. If the Swiss and the Danish pegs broke, why not these ones as well?

Therefore, like the action in the Saudi riyal, the move last night in the Hong Kong Dollar (HKD) should be noted. Specifically, the USD/HKD is showing the largest positive risk-adjusted return overnight and has moved further away from the 7.75 floor.

Now this is not related to crude oil per se, and is likely the result of outflows leaving the region as the Dollar-Yuan (USD/CNY) in China weakened to new highs. While that is a negative in itself, what it also does however is remove the “left-tail risk” of a “peg-break”. The key point here is that the removal of “gap risk” for the moment is more important than Asian fx weakness led by China and that will result in less overall currency volatility, at least on the margin.