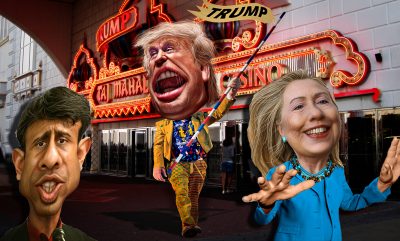 MarketsMuse inhouse political pundits are headed to Hempstead, NY, home of Hofstra University where the Circus Comes to Town disguised as the first tranche of 2016 US Presidential debates. While our inhouse politicos battle the LIE rush hour traffic in effort to get a ring-side seat for the Ringling Bros Bake-Off circus, our curators pass the ball for pre-debate color courtesy of global macro guru Neil Azous, principal of macro think tank Rareview Macro and publisher of Sight Beyond Sight.  Below extract first appeared in yesterday’s weekend edition of FinAlternatives.com

Tonight’s U.S. Presidential debate, infamously coined the “Humbling in Hofstra” by Mark Cuban, has the potential to reshape the world. Unlike the adage “one stock a market does not make,” our view is that “one debate an election can make.”

At the top-down investment level, this event will dictate asset prices over the next 72 hours more than any other catalyst. For the reasons we will layout below, our bias is to be short risk assets or hedged going into the event.

Additionally, the event will kick-off a greater rebalancing exercise at the sector, industry, and single stock level which might take a few weeks to find an equilibrium.

Firstly, this is an advertiser’s dream as over 100 million people are expected to tune in, the largest ever for a US Presidential debate.

The debate will run from 9 to 10:30 p.m. ET at Hofstra University in Hempstead, New York.

It will also be streamed live on various social networks. That way, the millennials who cut-the-cord from networks have an opportunity to follow along as well.

Secondly, it is important to recognize the extreme view that non-US citizens take on Donald. J. Trump. They view Trump in a similar vein as the Dear Leader in North Korea – that is, highly concerned over the prospects of his ascent on the world stage and having access to weapons of mass destruction.

The key point here is that if there is going to be a change in viewpoints on Trump, it will be for the better, as it cannot get much worse internationally.

Finally, the political strategists, already bruised from being wrong on Trump for 18 months, are struggling to pinpoint what a win or loss looks like for either candidate in advance of tomorrow night’s debate.

As evidenced by the widespread views expressed on the various Sunday morning talk shows this morning, they are all soul-searching at the moment.

The conclusion, especially after a surprise ‘Brexit’ outcome, is that paid forecasters, political strategists, media persona, and politicians are worthless in shaping sentiment and helping investors construct their portfolios.

Allow us to put one simple view forward.