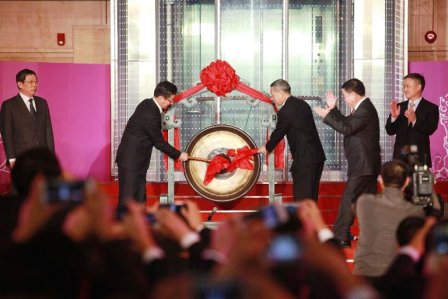 A MarketsMuse special update, courtesy of compiling various columns from Bloomberg, ETF.com, Fortune and a special treat: this piece was sponsored by Mr. Chow’s! (see below)

After much fanfare, the “Shanghai-Hong Kong Stock Connect” is officially connected and ostensibly, this will be the link between brokers, dealers, ETF Issuers and global investors seeking access to a menu of mainland China stocks and bonds, whose market value is more than $4.2tril (if anyone knows another acronym for ‘Trillion”, please email us or simply comment below!). Even if trade volumes during the first 2 days appeared soggy (which some attribute to aversion to MSG, not China stocks or ETFs), this is a story that, according to many experts, is a watershed moment.

Noted Neil Azous, principal of global macro strategy think tank, Rareview Macro LLC,  “This is a transformational event. Though the first day ‘scorecard’ indicates that retail/local investor support in Shanghai has proven successful out of the gate, institutional interest is still nascent, as evidenced by the big drop in Hang Seng share prices yesterday.” Added Azous, “Because the liberalization of markets is 1 of 4 key anchors to China’s long-term game plan, it is easy to expect that the opening of China markets to foreign investors might be incremental, but also integral to the evolution of the global financial marketplace.”

Below please find a collection of excerpts and ETF mentions that MarketsMuse has ‘cherry-picked’ from news outlets:

(Bloomberg) — The race is on to give U.S. exchange-traded fund investors access to $9 trillion of stocks and bonds in mainland China.

Money managers including BlackRock Inc. and CSOP Asset Management Ltd. have now registered almost 40 ETFs tracking the country’s domestic shares and debt with U.S. regulators, six times the number of existing funds. The products allow anyone with a U.S. brokerage account to gain exposure to Chinese securities that were previously off limits to all but a few qualified institutions.

“The Chinese market is very important for us; we will try to be part of this link,” Hiromi Yamaji, the chief executive officer of Osaka Exchange Inc., a unit of Japan Exchange, told reporters in Hong Kong. Yamaji did not specify how the operator of the Tokyo Stock Exchange intends to join the trading link.

China is perceived as a holy grail of investment opportunities for the global capital markets,” Andy Nybo, the head of derivatives research at New York-based Tabb Group LLC, said in a phone interview. “Getting involved with the Shanghai and Hong Kong exchanges in the early stages gives them a seat at the table, gives them access to strategic decisions being made by the regulatory authorities.”

The $444 million Deutsche X-trackers Harvest CSI 300 China A-share ETF (ASHR | D-55) has taken center stage ever since the “Stock Connect” was first announced in April. ASHR was the first physically backed, “RQFII” ETF to launch in the U.S. and tracks the mainland’s benchmark CSI 300 Index.

ASHR’s gotten the lion’s share of inflows for A-share funds, netting more than $262 million since May 1. ASHR got so hot at one point that Deutsche X-trackers had to limit creations to 1 unit per day in September because the fund was brushing up against its quota (the limit has since been increased to 10 creation units per day).

Since May 1, ASHR has gained more than 22 percent as investors rushed into A-shares in anticipation of the Stock Connect and on optimism over recent reforms around China’s state-owned enterprises (SOEs). More on this story at ETF.com
Global X, the New York-based ETF sponsor known for a variety of niche strategies, this week plans to launch a bond fund focused on mainland Chinese fixed-income securities, though in the initial stages, some of the exposure may be obtained indirectly via swaps. It’s only the second such ETF on the U.S. market.

The Global X GF China Bond ETF will trade with the ticker “CHNB” and have an annual expense ratio of 48 basis points, or $48 for each $10,000 invested, according to the fund’s latest updated prospectus. The fund is mining what is widely considered an underexploited and prospective piece of global investment markets, namely mainland China.

As noted, CHNB is the second bond fund to launch that is focused on renminbi-denominated debt—it followed the pioneer in the space, the Market Vectors ChinaAMC China Bond ETF (CBON), by one week. Although gaining access to China’s big mainland market is a plus, the finer points of that access remain at times thorny. CBON, by the way, has an annual expense ratio of 50 basis points.

CHNB will at times use over-the-counter swaps designed to mimic the exposure of bonds in the underlying index—a collection of renminbi-denominated securities issued by governments, agencies and state-owned enterprises, the prospectus said. The swaps exposure introduces counterparty risk to the overall risk profile of the ETF.

The new fund will have its primary listing on NYSE Arca.

ETF.com Market Vectors launched a bond fund focused on “RMB bonds” that are issued and traded in the interbank market in mainland China, making this ETF the first of its kind issued in the U.S. market.

The Market Vectors ChinaAMC China Bond ETF (CBON), which comes with a net annual expense ratio of 50 basis points, has its primary listing on NYSE Arca, according to the ETF’s latest updated prospectus.

Chinese credit issuers are generally considered to be issuers of central enterprise bonds, local enterprise bonds, medium-term notes, corporate bonds and railway debt. Credit RMB bonds must have at least one AAA rating by one of the Chinese local rating agencies recognized by the relevant authorities in the PRC to be included in the index.

As of Sept. 30, 2014, the index comprises 1,446 bonds of 244 issuers. The index is compiled and calculated by the China Central Depository & Clearing Co., Ltd, the prospectus said.

One would expect trading volumes to be the highest at the beginning and have daily trading limits hit extensively,” Credit Suisse said, according to Dow Jones Newswires. “While we do expect participants to increase materially over time, southbound volumes were disappointing.”

The creation of the trading platform is seen as a key step towards greater liberalisation in the world’s second largest economy.

But it is subject to strict limits in order to preserve capital controls in China, where Communist authorities keep a tight grip on the yuan currency.

If an investor buys stocks in the other market, when they sell the money can only go back to their home market account, a so-called “closed path” to prevent “hot money” leaking out.

However, while Hong Kong dealers are keen to buy up firms in China, many mainland traders — who are usually elderly, private investors — are reluctant to go the other way, and enter a market with which they are not familiar.
Read more: http://www.businessinsider.com/afp-hong-kong-shanghai-trade-link-disappoints-on-day-two-2014-11#ixzz3JRxClf4g