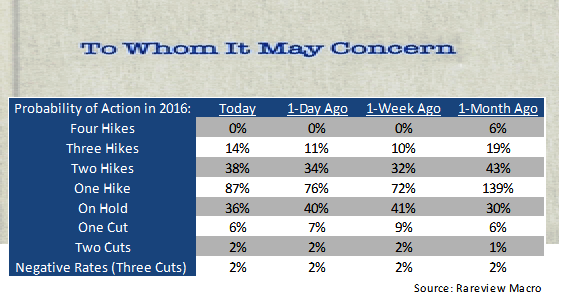 Memo: To Whom It May Concern: Inflation Risk is Back In Play

Below is a special edition of global macro commentary courtesy of Stamford-based think tank Rareview Macro LLC, the publisher of “Sight Beyond Sight.” The following has been excerpted by the curators at MarketsMuse and republished with permission from the author, Neil Azous.

For the last two years the expectations around the path of Federal Reserve policy swing from one side of the spectrum to the other every six to eight weeks.

This time is no different, and as that pendulum reaches an extreme, it just comes down to trading probabilities.

Right now, our models spit out the following – inflation risk is back in play.

Now, we do not care whether the Fed raises interest rates or not at the upcoming meetings. We only care that the market begins to believe the Fed will be at some point shortly on account of being behind the curve on inflation.

What we mean by that is that from the first speeches after next Wednesday’s FOMC meeting – which usually start on the Friday following – the tone from the various policymakers on the FOMC will begin to sound more hawkish.

A new drumbeat from the Committee will unlock the Treasury market to move away from the range it has been trading in for the past two months.

At the end of the day: the fixed income market needs to price in the inflation impulse that all other assets are reflecting.

Below is a list of five illustrations that describes our process that we use to determine the probabilities of Fed action over the next 12 months. Included is an explanation for each chart.

The first chart looks at the implied probability of a hike “BY” a certain meeting, which is the cumulative probability of every meeting before that point (i.e. adding them all up to a certain point).

The second chart looks at the unconditional probability of raising interest rates “AT” a certain meeting, which is specifically the probability of an individual meeting.

The third chart is our ‘decision tree’ illustrating the process we use to calculate answers to the following:

From there, we use options on Eurodollar futures to recreate these four scenarios digitally.

What is the probability of the Fed raising rates at the June meeting?

What is the probability of the Fed raising rates at the September meeting?

Once we know the probability assigned to each of those two outcomes, by following the flow of the decision tree, we can determine the mathematical probability of the outcome of our original four questions.

Neil Azous is the Founder and Managing Member of Rareview Macro, an advisory firm to some of the world’s most influential investors and the publisher of the daily newsletter Sight Beyond Sight®. Neil has close on two decades of experience across the financial markets, and is recognized as a thought leader in global macro investing. Prior to founding Rareview Macro, Neil was a Managing Director at Navigate Advisors where he specialized in constructing portfolios and advising on risk. His daily commentary was highly regarded by the institutional investing community and his success in delivering a forward-looking viewpoint on global markets helped lay the foundation for Sight Beyond Sight® to be built. On Wall Street, his career included roles at UBS Investment Bank and Donaldson Lufkin & Jenrette, where his responsibilities comprised of trading derivatives, hedging solutions, asset allocation and fundamental securities analysis. He began his career at Goldman Sachs in Fixed Income, after completing both the firm’s Analyst and Associate training programs, widely acknowledged as the pre-eminent and most coveted learning ground for undergraduate and graduate students. Neil completed graduate level coursework for a MS in Real Estate at New York University and received his BA in Business Administration from the University of Washington, where he is a member of the University of Washington Bothell Board of Advisors and was the recipient of the Bothell Business School 2013 Distinguished Undergraduate Alumnus Award. He is active in various charity and community organizations.